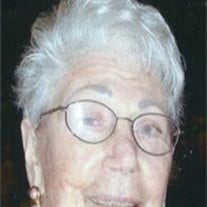 Mary P. Grodsky, 92, Overland Park, KS passed away Friday December 30, 2011 at KC Hospice House. Funeral services in the Chapel at Kehilath Israel Blue Ridge Cemetery, Monday, 1:00pm January 2, 2012. Burial will follow. Kindly omit flowers. The family suggests contributions to KC Hospice House, 12000 Wornall Rd., Kansas City, MO 64145. Mary grew up in New Orleans and at age 18 moved to Boston to live with her extended family. She traveled to Maine in 1945 where she met Arthur Grodsky. After a whirlwind courtship of a few months Mary went to Mobile, AL to meet Arthur’s family and they married a week later. Mary and Arthur remained in Mobile until they moved to the Kansas City area for her work in 1970. Mary began her work career as a secretary but soon became a pioneer in woman’s employment becoming the first female draftsman hired by the US Air Force and General Services Administration. She retired from the GSA in 1978 after 27 years but continued her working career as a sales associate at The Jones Store, retiring in 2003. She was very talented and loved to sew. She was active in the Theater Guild in both Mobile and Kansas City. She loved family, especially her grandchildren and extended family of nieces and nephews. Mary was preceded in death by her husband of 65 years: Arthur A. Grodsky; sister: Ruth Himelfarb and Anne Lidell. She is survived by daughters and sons-in-law: Claire and Dan Smith, Linn Valley, KS, Janet and Keith Harris, Overland Park, KS; grandchildren: Michael and Kim Harris, Nixa, MO, Lori and Rustin Bolejack, Overland Park, KS, Brad and Amy Geraldi, Olathe, KS; great-grandchildren: Preston Asher Harris and Cooper Daniel Harris, both of Nixa, MO, Rylan Ray Bolejack, Overland Park, KS; numerous nieces and nephews also survive. Mary will be greatly missed by all of her family and many friends. The family would like to thank the staff at the Kansas City Hospice House for their loving and compassionate care. They also want to thank the outstanding home hospice nurses: Neva, Kim, Roxanne and Jean and especially Mary’s personal care giver Casey Hopper for the excellent care she provided their mother.

The family of Mary P. Grodsky created this Life Tributes page to make it easy to share your memories.