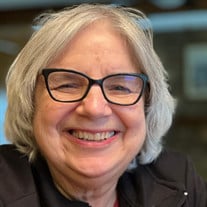 To have known Matilda Laura Rosenberg was to be splashed with Mediterranean sunshine. She was incredibly loved by those she held dear - family, close friends, colleagues and the hundreds of families she served in a distinguished social work... View Obituary & Service Information

The family of Matilda L. Rosenberg created this Life Tributes page to make it easy to share your memories.

To have known Matilda Laura Rosenberg was to be splashed with...