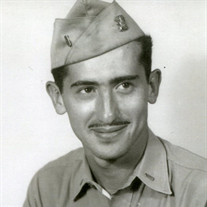 Maurice Dubinsky, 92, a lifelong Kansas City area resident, passed away December 28, 2015. Funeral services will be 1:00pm Wednesday, December 30, 2015 at Louis Memorial Chapel, 6830 Troost Ave., Kansas City, MO 64131. Interment will be at Rose Hill Cemetery. Memorial contributions may be made to the City of Hope, Continua Hospice or The Temple, Congregation B’nai Jehudah. Maurice was born August 6, 1923 in Kansas City, MO to Mendel and Ida Dubinsky. He attended Central High School and graduated in 1940. He had one year of Junior College before he enlisted in the U.S. Navy in October of 1942. Maurice was assigned to the fighter/bomber squadron VBF-10 on the USS Intrepid in the Pacific Theater. He later flew in the Reserves until June of 1950 at the Olathe Naval Air Station before being discharged as a Lieutenant. Shortly after, Maurice went into the insurance business where he would work for the next 50 years before retiring in 2000. After retiring he was a Docent at the Kansas City Zoo for 15 years. He was a current member of The Temple, Congregation B’nai Jehudah and was a board member of its Brotherhood. Maurice was also a member of the Jewish War Veterans, the American Legion Post 605, Veterans of Foreign Wars Post 10299 and the Harriet Dubinsky Chapter City of Hope. Maurice was preceded in death by his parents; his first wife, Harriet Dubinsky and sisters, Yetta Levine, Ida Sebert, Dorothy Lipkin and Sarah Yagan. Survivors include his wife, Rhoda Dubinsky; daughter, Marci Klein and husband Mark of Overland Park, KS; son, Jeff Dubinsky and wife Debbie of Overland Park, KS; step-daughter, Cheryl Sternberg and husband Tom Curley of Dallas, TX; step-son, Michael Sternberg of Dallas, TX; grandchildren, Halley Goldstein and husband Erich, Cara Cowsert and husband Wes, Adam Dubinsky and wife Erin, Jonathan Dubinsky and wife Elizabeth, Gregory Dubinsky, Ryan Klein; great grandchildren, Max Goldstein, Zoey Goldstein, Gianna Cowsert, Eli Cowsert, William Dubinsky and Stella Klein.

The family of MAURICE DUBINSKY created this Life Tributes page to make it easy to share your memories.