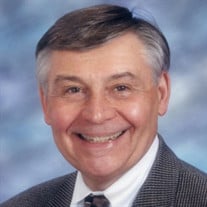 Maurice Soltz, 80, of Overland Park, KS, passed away Sunday, October 1, 2017. Funeral services will be at 2:00pm Tuesday, October 3, 2017 at The Louis Memorial Chapel, 6830 Troost Avenue, Kansas City, MO 64131 with burial to follow at Mt. Carmel Cemetery. In lieu of flowers, the family requests contributions to the E. David Soltz Israel Scholarship Fund, % The Jewish Community Foundation, 5801 W. 115th St., Overland Park, KS 66211. He was born December 23, 1936, in Kansas City, MO, the son of Frank and Leona (Levitch) Soltz, and was a lifelong area resident. Maury was a graduate of Paseo High School, and then attended the University of Missouri – Columbia, MO where he was a graduate of their Law School and also received his undergraduate degree from MU. He was a member of the ZBT fraternity at MU. Maury practiced law for 53 years in downtown Kansas City, retiring in 2014. He was a lifelong member of the Kansas City and Missouri Bar Associations. Maury was a current member of Beth Shalom Synagogue and Kehilath Israel Synagogue as well as a member of the Jewish Community Center where he loved to exercise and schmooze. He was a devoted Missouri Tiger fan and loved to travel the world with his wife Ellen, and especially going to Israel to visit his grandchildren. Maury enjoyed running and swimming and participating in marathons and triathlons. He was preceded in death by his parents and a son, David Soltz. Maury is survived by his wife of 49 years, Ellen Soltz, of the home; sons and daughter-in-law: Danny Soltz, Overland Park, KS and Randy and Cheryl Soltz, Ramat Bet Shemesh, Israel; brothers and sisters-in-law: Dr. William and Leslie Soltz, Highland, CA; Dr. Robert and Kay Soltz, Wichita, KS and Ed and Marcia Soltz, Leawood, KS; brother-in-law and sister-in-law, Richard and Marsha Rosenthal, St. Joseph, MO; grandchildren: Yaakov, Ephraim, Leah, Naftali and Devorah Soltz and many nieces and nephews He truly enjoyed being with his family during special times, vacations and the holidays. Maury was also an expert gardener. He will be greatly missed by his family and many friends.

The family of MAURICE B. SOLTZ created this Life Tributes page to make it easy to share your memories.