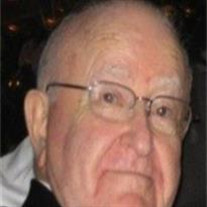 Max Helfand, formerly of Overland Park, KS, passed away early Wednesday October 10, 2012, in Delray Beach, FL at the age of 92. Graveside funeral services were held at Montefiore Cemetery in Queens, NY on Friday, October 12, 2012. Max was born in Brooklyn, NY on August 9, 1920 to parents Kopel and Mary Helfand, the youngest of six children. He graduated from Tilden High School in Brooklyn, NY. While in high school, Max began working in the garment industry in New York City. Max served as a bombardier navigator in the United States Army Air Corp for three years during World War II. Following the war, Max continued his career in garment manufacturing, specializing in women’s coats and suits. Max married Betty, his wife of 48 years, in 1943, and eventually welcomed his two children, Susan and Richard. In 1969, Max moved his family to Kansas City where he began work as the Vice President in charge of Manufacturing at Youthcraft Manufacturing Corp. While in Kansas City, Max was an active member of Congregation Beth Shalom where he served on the Board of Directors and as Chair of the Cemetery Committee. Additionally, Max and Betty were actively involved in the local chapter of City of Hope. In 1987, Max and Betty retired to Delray Beach, FL where he resided until his passing. Max served on the Board of Directors of Temple Emeth in Delray Beach, FL, where he was an active member. Max also worked as the Treasurer of his condominium association for over 20 years. Following Betty’s death in 1991, Max shared a long term loving friendship with his partner Rose Oppenheimer, a Holocaust Survivor, until her passing in 2006. Max is preceded in death by his parents, four older siblings, his beloved wife Betty (1991), and his daughter Susan (2010) and son-in-law Sandy Black (1999). Max is survived by his son Richard and daughter-in-law Vicki, of Leawood, KS; grandchildren Rabbi Corey Helfand and wife Jenny Ackerman Helfand of Foster City, CA, Ethan Helfand of Leawood, KS, David Helfand of Los Angeles, CA, Donna Black-Phillips of Melville, NY, Gayle Benno and husband Ameer Benno of Brooklyn, NY, Keith Black and wife Kim Hodne Black of Massapequa, NY; great-grandchildren Shaun Philips, Sophia and Violet Benno, Eden Helfand, and Matthew Black. The family would like to extend thanks to Max’s dedicated care provider Joy Burrell, for her devotion and kindness over the past two years. The family requests that donations be made to United Synagogue Youth (USY), 820 2nd Ave. 10th Floor, New York, NY 10017 or Peninsula Sinai Congregation 499 Boothbay Ave, Foster City, CA 94404. May Max’s name and memory be for a blessing, Yehi Zichron Baruch.

The family of Max Helfand created this Life Tributes page to make it easy to share your memories.