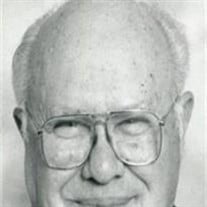 Max Swade, 93, passed away on Tuesday, March 15, 2011 at Rose Estates Assisted Living in Overland Park, Kansas. Family and friends may celebrate and honor Max’s life at a funeral service at The Louis Memorial Chapel, 6830 Troost Avenue, Kansas City, MO, on Thursday, March 17 at 3:30pm, followed by burial at Rose Hill Cemetery. Max was the son of the late Robert and Anna Swade. As a youth he was active in AZA and later years in B’nai B’rith. He served his country in World War II in the Army Air Corp division and was stationed in Fairbanks, Alaska. He lived his entire life in the Kansas City area. Max married Harriet Snitz on August 23, 1942. During the sixty-eight years of their marriage, not a day went by that he didn’t pronounce his love for his one and only Harriet. Many may remember Max for his friendliness and care for others. He owned Swade Insurance Agency and had many loyal customers, some over forty years. After selling the agency, he continued to work in the insurance industry well into his eighties. He was a spunky man and family meant everything to him. Max always said he had a good life and made sure every ne in his family was taken care of. His family will always remember the many family vacations we shared, the Friday evening dinners and later on those changed to Sunday evenings. Even though his health declined the last few years, he always maintained a good sense of humor, complained little, and always appreciated the care he and Harriet received at Rose Estates. He never forgot to ask about how all of his grandchildren were doing. Hearing the stories of each brought great joy to him. Max was indeed a special man and was loved greatly by his family. Max took such pride in his entire family and will be missed greatly by his beloved wife, Harriet, children Mickey and Bonnie Swade, Judy and Michael Lerner and Robbie and Steve Gordon. Max is also survived by grandchildren Amy and Keith Gates, Haley and Jason Pomorantz, Zac and Sarah Swade, Corie and Collin Asch, Ali and Kevin Daughtery, Jason Lerner, and great-grandchildren Max and Megan Gates, Sydney and Jonah Pomorantz, Zoe and Eli Swade and soon-to-be-born grandson baby Asch. He is also survived by his brother-in-law and sister-in-law Donald and Wanda Snitz. Max was preceded in death by his grandson Brett Swade. The family wishes to thank the staff and caregivers of Rose Estates and Compassionate Care Hospice. In lieu of flowers, the family suggests donations to Compassionate Care Hospice, 10000 W. 75th St., #231, Overland Park, Kansas 66204-2241 or SASS-MoKan (Suicide Awareness Survivor Support), PO Box 23242, Stanley, Kansas 66223.

The family of Max Swade created this Life Tributes page to make it easy to share your memories.