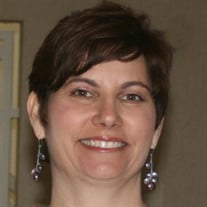 Melissa Palan Goldenberg passed away Monday, September 18, 2017 surrounded by her loving family. Missy was born on July 12, 1971, in Kansas City, MO, to Bob and Barbara Palan. She graduated from Shawnee Mission South High School where she was a member of the girls’ flag team and Editor-in-Chief of the school yearbook. Missy graduated Magna Cum Laude from Washington University in St. Louis, MO with a degree in elementary education. Upon graduation she taught at Oak Hill Elementary School. She later received her Master’s degree in Special Education from St. Joseph University. In 1996 she married her soul mate, Jeff, and together they raised three lovely daughters, Elana, Kayla, and Mirra. When her daughters began school, she returned to teaching at Hyman Brand Hebrew Academy where she was a resource teacher for many years. She also was an adjunct professor at the University of Saint Mary where she taught in the graduate school of education. Missy was active in numerous community organizations and served at one time on the boards of Congregation Beth Shalom Synagogue and the National Council of Jewish Women. Her love of children was never ending as was demonstrated by the profession she chose. Missy leaves her beloved husband, Jeffrey, and children, Elana, Kayla and Mirra, all of the home. She also leaves her parents, Bob and Barbara Palan of Overland Park, her brother David Palan and his wife, Amanda of Overland Park; her sister, Jamie Weinstein and her husband, Brian, of Woodcliff Lake, NJ; her mother-in law and father-in-law, Marsha and Seymour Krinsky of Overland Park; her sister-in-law Shira Zigler and husband, Scott, of Overland Park; brother-in-law, Richard Goldenberg and wife, Karen, of New Orleans, LA; step-sister-in-law, Jerri Arlan and husband Larry of Leawood and step-sister-in-law, Sharon Davis and husband, Joel of Northbrook, IL. She was loved and survived by many nieces and nephews, aunts, uncles, cousins and friends by whom she will be dearly missed. Missy was a kind, loving and caring person whose life touched all those she met. She was an inspiration to not only her loving friends and colleges but to all that knew her. The family would like to thank the entire community for their love and support. Funeral services will be at The Louis Memorial Chapel at 11:00am Wednesday, September 20, 2017 with burial to follow at Mt. Carmel Cemetery. In lieu of flowers, donations can be made to The Melissa Palan Goldenberg Charitable Giving Fund at the Jewish Community Foundation of Greater Kansas City or to the charity of your choice.

Melissa Palan Goldenberg passed away Monday, September 18, 2017 surrounded by her loving family. Missy was born on July 12, 1971, in Kansas City, MO, to Bob and Barbara Palan. She graduated from Shawnee Mission South High School where she was... View Obituary & Service Information

The family of MELISSA PALAN GOLDENBERG created this Life Tributes page to make it easy to share your memories.