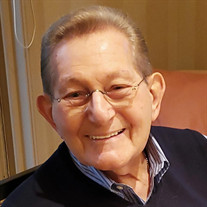 Melvin Cosner passed away peacefully on February 16th, surrounded by his family at home. He was one month shy of his 91st birthday. Services will be at 1 pm Wednesday, February 19, 2020 at The Louis Memorial Chapel, 6830 Troost Avenue with burial to follow at Kehilath Israel Blue Ridge Cemetery. He was born on March 16, 1929 in Kansas City MO to Esther and Ben Cosner. He graduated from Paseo high school in 1946 and was a member of the Del Ray Fraternity. He graduated from Washington University in St. Louis MO in 1950 and was a member of Sigma Alpha Mu Fraternity. After graduation he went to work for his family’s business, Lady Baltimore Foods. He also served in Korea in the army. In 1950 he met the love of his life, Sibby, and they were married on January 28, 1951. They recently celebrated 69 years of a most loving, happy marriage. Sibby and Mel were crazy about each other from their first date and spent a lifetime together in love. In 1956 he became a partner in the family business and in 1973 he became President and CEO. He worked alongside family and many employees who became like family. He worked there until he retired at the age of 75. In retirement he was a member of the ROMEOs (Retired Old Men Eating Out). Mel had four children and they were his motivation for working very hard all his life to provide for them. He was the greatest dad. He helped with the always dreaded math story problems, making them crystal clear until you went back to your bedroom to work on the next one. He taught us important life lessons such as “there's no free lunch” and was the best dance partner a daughter could have had. He loved to sing and knew more songs than you could imagine, belting out a tune at the drop of a hat. He sang at home, at the bank, and in retirement with the Heritage Group at the Jewish Community Center. He was a terrific dancer in his day and loved to dance the night away with his beloved Sibby. He enjoyed classic movies on TCM and live musical performances. He was a lifelong member of Kehilath Israel Synagogue and Temple Congregation B'Nai Jehudah. Mel was preceded in death by his parents Ben and Esther Cosner and his beloved son, Alan. He leaves behind his loving wife Sibby, daughter Nancy Kohn (Richard), daughter Gail Tucker (Mark), daughter Beth Cosner, brother Jerry Cosner (Barbara), sister-in-law Vera Cohen, daughter-in-law Kerry Cosner (Michael Block), grandsons Justin Cosner, Brandon Cosner (Paige) and granddaughter Erin Kohn, many nieces and nephews and some of the best friends ever. The family would like thank Dr. John Dunlap, Dr. Marie Delcambre, Patient Advocate Connie Fahey, caregivers from Hearts at Home and Kansas City Hospice for all the loving care they provided. In lieu of flowers, the family suggests charitable donations to Kansas City Hospice House, SASS (Suicide Awareness and Survivor Support), The United States Holocaust Memorial Museum or the charity of your choice.

Melvin Cosner passed away peacefully on February 16th, surrounded by his family at home. He was one month shy of his 91st birthday. Services will be at 1 pm Wednesday, February 19, 2020 at The Louis Memorial Chapel, 6830 Troost Avenue with burial... View Obituary & Service Information

The family of Melvin Cosner created this Life Tributes page to make it easy to share your memories.