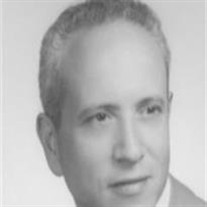 Melvyn Joseph Hakan, 90 years young, of Overland Park, KS, passed away peacefully surrounded by his loving family on February 4, 2012. Mel was born January 30, 1922 in Kansas City, MO to Albert J. & Birdie Michaelson Hakan. A Memorial Service will be held on Monday, February 6, 2012 @ 12:30 pm in the Chapel at The Temple, Congregation B'nai Jehudah, 12320 Nall Avenue, Overland Park, KS 66209. Mel was a member of Boy Scout Troop 61. He graduated from Southwest High School and Illinois College of Optometry. Mel served in the US Army Air Force during World War II. He practiced Optometry with offices in Brookside and Lee’s Summit, MO. He was a Real Estate Broker for over 50 years, working at Block & Company, Hakan-Bettinger Real Estate, Hakan-Childs Real Estate, Roger Cohen Real Estate, and then again at Block & Company Real Estate where he worked up until his 90th Birthday. Late in life, he also went back to Optometry school to update his learning and then practiced optometry at US Vision, where he served on their National Advisory Board. He was the oldest living practicing Optometrist in the State of Missouri. Mel was involved in forming the Kansas City Jazz Festival in the 1960’s, developed the Sheraton Royal Hotel with Ewing Kauffman in the early 1970’s, and represented Kansas City business leaders at the White House in the late 1970’s & early 1980’s. Mel was active in non-profit causes – he organized the Lion’s Club effort to donate eyeglasses for those in need and unable to afford them, he served as Chairman of the Board of Directors of Ozanam Home for the Boys & Girls, and others. Mel served as President of the Men’s Club at Congregation Beth Shalom, and was a long standing member at The Temple, Congregation B’nai Jehudah. He was an avid Kansas City Royals fan, and former member of The Royals’ Lancers. Mel is predeceased by his Mother & Father & sister Lucille Hakan Rubin. He is survived by Rowena French Hakan, his wife of over 40 years, 4 children, Brian (Julie) Hakan of Overland Park, KS, David (Inga) Hakan of Las Vegas, NV, Jane (Brett) Lazzareschi, San Francisco, CA, & Renee (Ron) Mills of Lesotho, Africa; 5 grandchildren, Sara Hakan, Allison Hakan, Amanda Hakan, Daniel Hakan & Brianna Hakan; and his Brother, Bob (Terri) Hakan of Tulsa, OK. Mel has requested that you remember him by making a donation to The Temple, Congregation B’nai Jehudah, or The Center for Wellness & Achievement in Education (401 Van Ness, suite 319, San Francisco, CA 94102), or Ozanam Home, or the charity of your choice. He also suggests that you take someone you love out to dinner and have a drink, then share a toast with a kiss and a hug. The family wishes to thank Rabbi Arthur Nemitoff & Cantor Sharon Kohn as well as Doctor John May & David Block for all their support and tender loving care.

The family of Melvyn Joseph Hakan created this Life Tributes page to make it easy to share your memories.