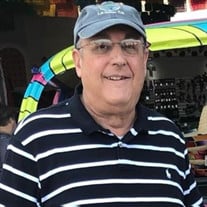 Michael Stephen Dalen passed away on June 8, 2021, after a long battle with a chronic and, ultimately, fatal disease. Michael was born May 10, 1946. As a young man, Michael was active in the boy scouts, achieving the status of Eagle Scout, a member of the Tribe of Mic-O-Say, and attending boy scout camp in Osceola, MO, even into his adult years. He was a graduate of Southwest High School; Missouri Valley College in Marshal Missouri (BS); and Central Missouri State University (MSEd). Michael began his career as a teacher and counselor in the Shawnee Mission (KS) School District, teaching at Hillcrest Junior High and Broadmoor Junior High for five years. It was at Broadmoor where he reconnected with Ellen Fox Dalen, the love of his life and wife of nearly 50 years. He left teaching to join the federal ASAP Program in Jackson County (MO) and later helped launch an innovative alcohol and drug program for the Johnson County (KS) government. He went into private practice as an addictions counselor in 1978, and owned Alcohol and Drug Services until he retired in February 2021. He served in the Kansas Air National Guard for 30 years – 20 years stationed at Forbes Field in Topeka and the final 10 years of his career in the Adjutant General’s office as the State of Kansas’ chief social actions officer; he retired from the Guard in June 2000. Michael sang in the choir at Kehileth Israel Synagogue for more than 30 years and was an active member of Temple B’Nai Jehudah, where he was a regular fixture on Sunday mornings making popcorn for the Sunday School kids. For several years he drove the trolley in Kansas City on weekends as a hobby and enjoyed meeting visitors and showing off our city. Michael was a devoted husband, father, grandfather and friend. As a father, he was always supportive and encouraging of all of Jason and Nicole’s endeavors. He managed to attend nearly every game, concert, activity and event. He was there for, and a part of, every significant event in his kids’ lives and we are so grateful for the many memories. In 2000, he welcomed with open arms his “favorite daughter-in-law” Kathleen Boyle Dalen into the family. In his later years, he drove his granddaughter Abby to school most mornings, either delivering her breakfast when he picked her up or stopping along the way to eat with her, and attended all her games, concerts, shows and activities. When discussing whether to go into hospice care, after talking to the doctors, he was asked what he wanted to do and responded, “whatever is best for the family.” Those few words say everything about him as a husband and father. The family thanks the doctors, nurses, care givers and staff at the University of Kansas Hospital, Kansas City Hospice and Palliative Care and Village Shalom for the care and compassion they provided to Michael. They are wonderful and special people. Michael was predeceased by his father Sol Dalen; his mother Rose Dalen; and his sister Marcia Ann Dalen Colvin. He is survived by his wife Ellen Fox Dalen; his son and daughter-in-law Jason Dalen and Kathleen Boyle Dalen; his daughter Nicole Dalen Hill; and his granddaughter Abigail Taylor Hill. Funeral service will be graveside at Rosehill Cemetery on Thursday, June 10 at 11:00 am. In lieu of flowers, the family suggests donations be made to the Thelma and Meyer Fox Children’s Fund at the National Council of Jewish Women (5311 W. 75th St. Prairie Village, Kansas 66208), the University of Kansas Health System’s Organ Transplant Center (https://www.kansashealthsystem.com/giving/donate) or Kansas City Hospice and Palliative Care (https://www.kchospice.org/support/).

Michael Stephen Dalen passed away on June 8, 2021, after a long battle with a chronic and, ultimately, fatal disease. Michael was born May 10, 1946. As a young man, Michael was active in the boy scouts, achieving the status of Eagle Scout,... View Obituary & Service Information

The family of Michael S. Dalen created this Life Tributes page to make it easy to share your memories.