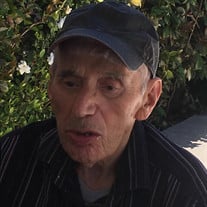 Michael Gross (born as Michal Grzywacz), 99, died Friday, January 4, 2019 at Bubbe and Zayde’s Nursing Home in Santa Ana, CA. He was born in Wielun, Poland in 1919 and lived through World War II, in part, by fighting in Russia’s Polish Army against the Nazis. He emigrated to the USA with his late brother, Ben Gross, and late sister, Marsha Pous. Michael married his late wife, Geraldine Kanter, and lived in Kansas City and Lenexa. He had a long career as a tailor, to which he retired at the age of 92. He is survived by his sons, Joseph and Fred, along with their wives, Barbara, and Diane. He has 7 grandchildren, Rebecca, Daniel, Sarah, Jon, Tiffany, Matthew and Alecia. He has 5 great-grandchildren, Bennet, Blakely, Callie, Gracie, and Akiva. The graveside service will be at the Mount Carmel Cemetery Wednesday, January 9th, at 2:00 PM. In lieu of flowers, please donate to the Midwest Center for Holocaust Education.

The family of Michael Gross created this Life Tributes page to make it easy to share your memories.