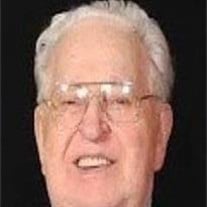 Michael Rothstein, age 90, of Overland Park, Kansas, passed away Tuesday, February 21, 2012, at Menorah Medical Center. Funeral services will be at 2:30pm Wednesday, February 22, at The Louis Memorial Chapel, 6830 Troost Avenue, Kansas City, MO with burial to follow at Sheffield Cemetery. The family requests no flowers and suggests contributions to the Hyman Brand Hebrew Academy Rothstein Family Fund or the Midwest Center for Holocaust Education. Michael Rothstein was born on October 14, 1921 in Taurage, Lithuania. He immigrated to Kansas City from Bari, Italy in 1949. Mr. Rothstein found employment as a carpenter in Kansas City and in 1952, he founded Michael’s Construction Company. He took pride in crafting quality construction projects and was particularly proud to have restored the Frank Lloyd Wright House at 3600 Belleview and to have built the three homes in the Kansas City area designed by Bruce Goff. A member of Beth Israel Abraham and Voliner synagogue since 1949, Mr. Rothstein was President of the BIAV married couples club and was a BIAV Board member from 1968 through 1987. He projected a personality that was larger than life. He was full of energy, love and laughter and seemed to be invincible. He was a survivor of the Holocaust. He rejoiced in his new life in America. He lived for each moment he could enjoy with his family. Michael Rothstein was preceded in death by his wife Olga, his sisters Pearl Rothstein, Doris Willenski, and Dale Jacobs; his brothers Schmuel Rothstein, Morris Rothstein, Benjamin Rothstein, Joe Rothstein and Herschel Rothstein; and his son-in-law Gerald Cromer. He is survived by his sister Lily Sandler, of Johannesburg, S.A., his daughter, Chana Cromer of Jerusalem, Israel, his son and daughter-in-law, Steven and Karen Rothstein, of Mission Hills, Kansas and by grandchildren, Mayan Cromer, Ariel Israel, Elisha Cromer and Adam Cromer, all of Israel and Amanda Rothstein of Overland Park, Kansas, and eleven great-grandchildren.

The family of Michael Rothstein created this Life Tributes page to make it easy to share your memories.