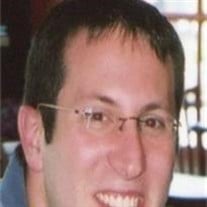 Michael Todd Wajcman, 32, of Overland Park, KS, passed away Monday, December 26, 2011 at Menorah Medical Center. Funeral services will be at 1:00pm Wednesday, December 28, at The Louis Memorial Chapel, 6830 Troost Avenue, Kansas City, MO 64131 with burial to follow at Mt. Carmel Cemetery. In lieu of flowers, the family requests contributions to 529 Plan, c/o of Merrill Lynch, Nextgen College Investment Plan FBO for Jeremiah, Eitan or Samantha, 3401 College Blvd, Leawood, KS 66211. Michael was born September 30, 1979 in Kansas City, MO the son of Simon Wajcman and Rochelle(Levy) Wajcman. He was a graduate of the KU Nursing School where he received his BS in Nursing. Michael was working towards his Master’s Degree to be a Nurse Practioner. Michael was an RN in the PACU at KU Medical Center. He was a lifelong member of Congregation Beth Shalom, B’nai B’rith Bowling League, the Nursing Honor Society and A.E.Pi fraternity. Michael was an avid sports fan and enjoyed playing softball, especially on Thursday nights. He also loved to bike, bowl and travel. He was preceded in death by his maternal grandparents, Jerry and Sarah Levy and his paternal grandfather, Kisel Wajcman. Michael is survived by his wife of 4½ years, Shira Wajcman; his children: Jeremiah Wajcman and twins, Samantha and Eitan Wajcman, all of the home; his parents: Simon Wajcman and Rochelle Wajcman, both of Overland Park, KS; sister and brother-in-law: Melissa and Brandon Winchester, Overland Park, KS and his paternal grandmother: Miriam Wajcman, Overland Park, KS; Michael loved his family and many friends. All family members were very important to him. He had a great sense of humor and loved being a nurse. He will be greatly missed by all his family and friends. The family would like to thank all of the doctors and nurses at KU and Menorah Medical Center for taking care of him through this period.

The family of Michael Todd Wajcman created this Life Tributes page to make it easy to share your memories.