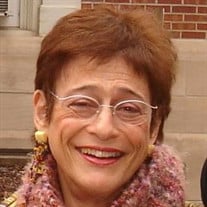 We are celebrating the life of Michele Goldman who passed away early in the morning on December 29, 2017 with family around her. Michele was born in San Luis Obispo, California on February 9th, 1942 to Sterling (Ronnie) Ronai and Ruth Rosen Ronai. A self-proclaimed Army Brat she settled into Kansas City and continued to live in the area throughout her life. Relationships and caring for others were a significant passion in Michele’s life, beginning with her family: her four siblings, husband, and three sons. Michele is the oldest.of four: Jill, Patti, and Jac. She married Michael Goldman on June 12, 1960, and they were married over 57 years. Their sons: Jeffery, Marc, and Keith were not the only ones that found a home with Michele. Craig Thompson, Pam Wheeler, and others found shelter and love under her roof. The values of hospitality, empathy, selflessness, and strength radiated from Michele to the many others treated as family. As time passes Michele would welcome her children's spouses: Robin, Stan, and Amy, and would come to be known as gramma puppy and granny Pekoe to her grandchildren: Patrick, Sydney, Jones, William, and Olive. Michele would pass on her love of cooking, “B” science fiction movies, and other joys to these and others. Beyond Michele’s role as a daughter, sister, wife, and mother, she was an entrepreneur juggling many things. One of her first ventures was making bagels to help support pre-school costs. For many years she worked at Ronai Coatings, the family business with her father and brother. She then struck out on her own with her own catering company, Design Catering, which she ran for over 30 years, with an ethic of nourishment and hospitality for her clients and those that worked with her. Michele is known for her acts of simple kindness which live on in the hearts of those who knew and loved her. Something Michele would say to her children is that “the things you remember never fade away” and they are finding some comfort in this lesson now. Michele Goldman’s funeral will be held at Louis Memorial Chapel at 1:00pm on Tuesday, January 2nd with burial at Sheffield Cemetery. In lieu of flowers a donation to a charity of your choice is encouraged.

We are celebrating the life of Michele Goldman who passed away early in the morning on December 29, 2017 with family around her. Michele was born in San Luis Obispo, California on February 9th, 1942 to Sterling (Ronnie) Ronai and Ruth Rosen... View Obituary & Service Information

The family of MICHELE R. GOLDMAN created this Life Tributes page to make it easy to share your memories.

We are celebrating the life of Michele Goldman who passed away...