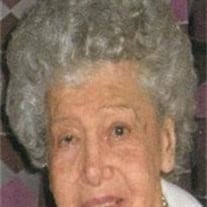 Mother, grandmother and great-grandmother Mildred (Kantor) Eichenwald of Overland Park, KS, passed away on Friday, March 16, 2012 at Village Shalom. She was 101 years old. Funeral services will be held on Monday, March 19, at 10:30 a.m. at The Louis Memorial Chapel, 6830 Troost Avenue, Kansas City, MO with burial to follow at Mount Carmel Cemetery. The family suggests contributions to Village Shalom in Overland Park, or your favorite charity in lieu of flowers. Mildred was born in Kalamazoo, Michigan to David and Slava Kantor (Bruk) as part of a set of twin girls. The family later moved to Cheyenne, Wyoming, where Mildred went to high school. In Cheyenne, she worked several years as a bookkeeper. In the late 1930’s, she moved to Kansas City, where several of her sisters were then residing. In 1945, she married Walter Eichenwald. For more than twelve years, she traveled the Midwest with Walter as his companion and assistant, representing several lines of men’s clothing. She loved seeing the country and going to new places with her husband. Mildred and Walter were married for 46 years, until his death in 1991. She was a member of Congregation Beth Shalom and a life member of Hadassah. Mildred is survived by her son and daughter-in-law, Howard and Sonia Eichenwald of Overland Park, two granddaughters and their husbands, Helene and Jeffrey Slutsky of New Albany, Ohio and Rachelle and Nat Milgram of Overland Park, as well as six great-grandchildren, Eli Slutsky, CJ Slutsky, Natalie Slutsky, Charlotte Slutsky, Lillian Milgram and Samuel Milgram and three step-great-grandchildren, Amanda Slutsky, Mitchell Slutsky and Shane Naster. She is also survived by her brother and sisters, Dr. Julius Kantor and Dorothy Peltzman, both of Overland Park, and Florence Fisher of Silver Spring, Maryland. Mildred was pre-deceased by her twin sister, Sarah Goodman and siblings, Leah Weber, Helen Padnos, Morris Kantor. The family would like to give a special thanks to the staff and her personal care givers at Village Shalom for her outstanding care during the past several years.

Mother, grandmother and great-grandmother Mildred (Kantor) Eichenwald of Overland Park, KS, passed away on Friday, March 16, 2012 at Village Shalom. She was 101 years old. Funeral services will be held on Monday, March 19, at 10:30 a.m. at... View Obituary & Service Information

The family of Mildred Eichenwald created this Life Tributes page to make it easy to share your memories.