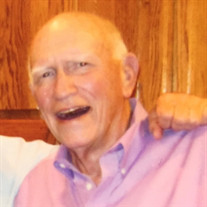 Miles Cohen, 82, passed away Wednesday, April 18, 2018 of natural causes. Funeral services will be 2:00 pm Sunday, April 22 at The Louis Memorial Chapel, 6830 Troost Ave, Kansas City, MO 64131. Burial will follow at Rose Hill Cemetery. In lieu of flowers, the family suggests making donations to Juvenile Diabetes Research Foundation, Jewish Vocational Service or The Temple, Congregation B’nai Jehudah. Miles was a lifelong resident of Kansas City, except for the last 11 years of his life spent in Lauderdale-by-the-Sea, Florida. He grew up in Kansas City, Kansas, son of Joseph and Margaret Cohen, z”l, and graduated from Pembroke Hill and University of Pennsylvania Wharton School of Finance. He worked for 30 years at Stern Brothers as a Stock Broker and was president of Rosedale State Bank for 15 years. Miles was a lifelong member of the Temple, Congregation B’nai Jehudah, and was active in the Jewish community, including being president of Jewish Vocational Service, of American Jewish Committee and of B’nai Brith. He loved to try new restaurants and travel with his wife, and he knew how to live the good life. He brought a sense of humor and playfulness to his everyday world. He leaves behind his wife of 27 years, Nancy Abloff Cohen; his sister, Hildy Flanigan (Pat) of Leawood; his daughter, Ruth Cohen Golmant (John) of Fredricksburg, Virginia; son, Matt Cohen (Mary) of Iowa City, Iowa; stepsons: David Kaufman and Dustin Kaufman (Alyssa); grandchildren: Mira and Noah Golmant and step-grandchildren: Oliver and Alfie Kaufman. He also leaves behind many first and second cousins, nieces and nephews and friends and family who will miss him dearly. In addition to his parents, his brother, Barton Cohen, z”l predeceased him.

The family of MILES ALLAN COHEN created this Life Tributes page to make it easy to share your memories.