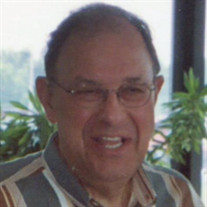 Milton Harris Adler, 89, Leawood, Kansas died September 18, 2018. He was born in Stanford, Connecticut on October 4, 1927. His nickname was "Mickey," after Disney's famous Mickey Mouse who was created 90 years ago in 1928. Mickey leaves behind his devoted wife Marjorie Stulz Adler, who cared for him until the end. He is survived by his children Randal ("Randy") and Meg Adler, Leawood; and Lisa and Jerry Bernard, Overland Park. He leaves behind seven grandchildren: Emily, Rebecca and Miriam Adler; Daniel, Rachel and Gavi Horwitz; Shira, and Benjamin Bernard. He will be missed by his devoted family of caregivers Marta (Helen) Araya, Mimi Tesfaye, Kofi Jordan, Jr., and Ann Murrell to name a few. The family is grateful for the care of all of his health care providers, especially Drs. Donald Cohen and David Skolnick. Mickey was preceded in death by his parents Noah and Ida Adler and two siblings Marion Lipsitz and Irving Adler of St. Louis, MO. He is survived by sister Evelyn Portnoff of St. Louis, MO; brother-in-law Robert Stulz; and former sister-in-law Janet Raskin Stulz. He will be missed by many nieces and nephews. He enjoyed a pleasant childhood until his father’s premature death. Mickey, then 11, was impacted greatly by this loss. Mickey started working at an early age to help his mother make ends meet. Mickey graduated from Washington University in St. Louis. He bottled beer and worked in the Catskill Mountains to fund college. After graduation in 1950, he served this county in the US Army Signal Corp in Japan during the Korean War. He always felt patriotic. Upon returning from the service, on the advice of Marion’s husband Abe Lipsitz, Mickey moved to Kansas City to start Kansas City Audio-Visual. He met Marjorie on a blind date. They were married at The Temple, Congregation B'nai Jehudah. Marge worked with Mickey for 59 years until retiring. Mickey had a strong work ethic, which he passed on to his children. He was known in the industry for his character and work ethic. He cared about family and work. He enjoyed sailing at Lake Jacomo because it was a family activity. Mickey was a sweet soul. He appreciated everyone who helped in his care and recovery. Mickey appreciated old friends and his new Brookdale Leawood family. Graveside services on Thursday, September 20, at 11:00 a.m. at Rose Hill Cemetery, Kansas City, MO. Donations to a charity of your choice.

Milton Harris Adler, 89, Leawood, Kansas died September 18, 2018. He was born in Stanford, Connecticut on October 4, 1927. His nickname was "Mickey," after Disney's famous Mickey Mouse who was created 90 years ago in 1928. Mickey leaves... View Obituary & Service Information

The family of MILTON HARRIS ADLER created this Life Tributes page to make it easy to share your memories.