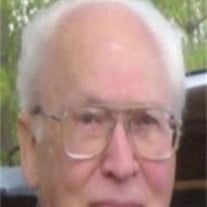 Milton L. Steinzeig, 87, was a lifelong resident of Kansas City, MO and the Jewish Community. He was born April 14, 1925 and passed away Sunday, October 14, 2012 surrounded by his loving family. Graveside services will be at 10:00am Wednesday October 17 at Rose Hill Cemetery, 6900 Troost Ave. In lieu of flowers, the family suggests donations to the Village Shalom Day Stay Program, c/o Village Shalom, 5500 W. 123rd St, Overland Park, KS 66209. Milton attended Kansas City schools and graduated from Paseo High School. At age 18, he enlisted in the United States Army, and proudly served three years in Europe as a radio operator in the Army Air Corps in World War II. Following his return, he joined his father and brother in the family jewelry business until his retirement. He was an active Boy Scout leader for over 50 years and was a member of the Tribe of Mic-O-Say and a recipient of the Jewish Scouting Silver Beaver Award. Milton also volunteered his time on several committees to help handicapped people. He was a member of The Temple, Congregation B’nai Jehudah and its Brotherhood. Always a lover of music, Milton learned to play the piano in his 50’s and loved to sing old songs. In his later years he enjoyed ballroom dancing with Marilyn. Milton was very artistic and created beautiful pictures with jewelry and beads, and was an avid woodworker. Milton was the rock of our family, and was always a true gentleman. He was preceded in death by his parents, Jacob and Dorothy Steinzeig and his mother-in-law, Eva Tigerman. Left to treasure his memory are his wife of over 62 years, Marilyn Kern Steinzeig, children Pamela Steinzeig and Cindy Steinzeig Cohen of Greater Kansas City and Steve and Carolyn Steinzeig of California. Papa also leaves his precious grandchildren who loved and adored him, Ashley Cohen, Jacob Steinzeig and Eric Steinzeig, and his buddy and granddog, Charlie. Also surviving are his brother and sister-in-law, Alan and Gloria Steinzeig, nieces Marcy Walker and Susie and Steve Jacob and their children, Lori, Betsy and Billy Jacob. The family would like to thank the staff of the Village Shalom Day Stay program for their kindness and compassion these past few years, Enhanced Home Care for their support and to the staff of The Bickford of Overland Park, Dr. Lou Sabih and the staff of Care Alternatives Hospice who helped Milton and the family through this difficult time.

Milton L. Steinzeig, 87, was a lifelong resident of Kansas City, MO and the Jewish Community. He was born April 14, 1925 and passed away Sunday, October 14, 2012 surrounded by his loving family. Graveside services will be at 10:00am Wednesday... View Obituary & Service Information

The family of Milton L. Steinzeig created this Life Tributes page to make it easy to share your memories.

Milton L. Steinzeig, 87, was a lifelong resident of Kansas City,...