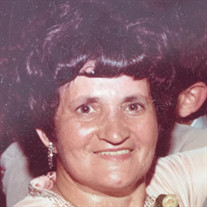 Miriam Wajcman, 91, of Overland Park, KS, passed peacefully surrounded by family on Thursday, January 12, 2017 at Village Shalom. Services will be at 10:30am Friday, January 13 in the chapel at Kehilath Israel Blue Ridge Cemetery, 1901 Blue Ridge Blvd, Independence, MO, with burial to follow. In lieu of flowers, the family suggests contributions to Kehilath Israel Synagogue, Beth Israel Abraham & Voliner Synagogue, Midwest Center for Holocaust Education or Village Shalom. Miriam was born June 6, 1925 in Lodz, Poland, the daughter of Samuel and Doba (Gershkorn) Markiewicz. She married Kisel, in 1949 in Paris, France and after the war, came to the United States in 1952, moving to Kansas City with their 10 month old son to join extended family. She was a seamstress for many years for prominent tailor shops in the Kansas City area. Miriam was a member of Kehilath Israel Synagogue and its Sisterhood, the Jewish Community Center and the New American Club. She took great pride in her family and was a very devoted and loving wife, mother, grandmother and great-grandmother. Miriam enjoyed traveling with her husband, knitting, cooking, making outfits for her grandchildren and was very proud of her traditional Jewish home. She was preceded in death by her parents and two sisters, Zelda and Tola in the Holocaust. Miriam was also preceded in death by her husband, Kisel in 1988, one grandson, Michael Wajcman, two sisters, Bena Gutovitz and Minia Nisenkier and her brother, Kopel Markowitz. She is survived by her sons: Simon and David (Mindy)Wajcman; daughter, Deborah (Michael) Stone; grandchildren: Melissa (Brandon) Winchester, Yehoshua Chaim Wajcman, Daniel (Sara) Wajcman, Kaley (Jon) Schwartzbard, Jordyn and Chloe Stone; granddaughter in-law, Shira Wajcman and 11 great-grandchildren.

The family of MIRIAM WAJCMAN created this Life Tributes page to make it easy to share your memories.