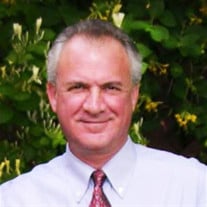 Mitchell Epstein, 64, of Overland Park, KS passed away unexpectedly on April 3, 2018. Mitchell was born July 29, 1953 to the late Arnold and Shirley (Temposky) Epstein in Kansas City, MO, while on a visit to Shirley’s mother. Mitchell spent his formative years in Binghamton, New York where he first discovered his love for animals, especially his horses, and became a music aficionado. Mitchell attended Syracuse University where he studied Anthropology. Mitch moved to Kansas City in the early 1970’s, where he set the Kansas City disco scene on fire. Mitchell loved automobiles, and from the 70’s on, he sold luxury cars, most recently at Aristocrat Motors in Merriam, Kansas. Mitchell loved music and could always be found truly dancing like nobody was watching. Over the years, he amassed one of the most impressive record collections ever seen. He could be found most Sunday afternoons cooking and jamming in his living room, genuinely loving his life. Nobody felt the emotion of a good guitar riff like Mitchell Epstein. In 1987 and 1989, Mitchell created his two greatest accomplishments in life. His sons, Blake and Brandon were his heart and soul. Mitch was overjoyed by each and every accomplishment of his sons, both small and large. He nurtured and encouraged them to find their own personalities and celebrated their individual paths in life. The bond he shared with his sons was a once in a lifetime bond that can never be broken. One of his favorite things to say over the years to his boys was “Just the three of us, always.” In 2010, Blake brought Lindsay home to meet Mitch, whom Blake would later marry. Lindsay and Mitch immediately became best good friends. Their special connection and friendship carried through to the end of his life with nearly daily phone calls and texts. In his spare time, Mitchell spent thousands of hours creating museum quality airplane models, keeping up with all things politics, listening to Blake play guitar, marveling over Brandon’s art, and telling Dad jokes with Lindsay. He is survived by his sons, Blake and wife Lindsay, Brandon, and sister, Stephanie “Happy” Hodge, his grandpups Abby and Carl, a long list of friends, family and Snapchat fans. He will be missed in the most incredible ways and his memory will live on through stories of his vivacious life. See you on the other side, Dad. A memorial service will be held at 11:00 am Wednesday, April 11, 2018 at The Louis Memorial Chapel, 6830 Troost Ave.,Kansas City, MO 64131, immediately followed by a casual reception for sharing memories of Mitchell at BLVD Tavern at 20 Southwest Blvd, Kansas City, MO 64108. In lieu of flowers, memorial contributions are suggested in Mitchell’s name to the ACLU, www.aclu.org.

Mitchell Epstein, 64, of Overland Park, KS passed away unexpectedly on April 3, 2018. Mitchell was born July 29, 1953 to the late Arnold and Shirley (Temposky) Epstein in Kansas City, MO, while on a visit to Shirley&#8217;s mother. Mitchell... View Obituary & Service Information

The family of MITCHELL EPSTEIN created this Life Tributes page to make it easy to share your memories.