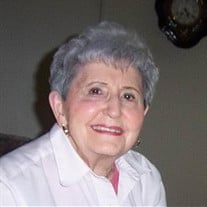 Mollie Zoglin, 97, Overland Park, KS passed away peacefully Sunday, May 25, 2014 at The Atriums. Funeral services will be at 12:00pm Wednesday, May 28 at the Louis Memorial Chapel, 6830 Troost Ave, with burial to follow at Rose Hill Cemetery. Mollie enjoyed a long, loving and adventure-packed life. She was born in Kansas City, Missouri, on August 11th, 1916, the daughter of Helen and Harry Rashbaum. Mollie was blessed with a life filled with love. She had a wonderful marriage with Frank and great relationships with her sons, Ron and Bob, and their life partners Deborah Shouse and Janine Brunello. She was also blessed with grandchildren, Hilee Shouse, Sarah Shouse and her husband Jeff Koenigs, and Nina Brunello. Her great-grandchildren, Robert Paul Koenigs and Annabelle Rose Koenigs, brought her enormous joy. She was graced with deep friendships and strong family connections: her sister and brother-in-law Rose and Manny Zoglin were important in her life, as were their devoted children, Richard, Janet, Larry and Paul Zoglin. Her sister-in-law, Betty Rashbaum and her nephew Steve were also important to Mollie. Mollie was a terrific cook, a true friend, an avid volunteer and an astute businesswoman. She was involved in The Temple, Congregation B’nai Jehudah, serving as President of the Sisterhood, as well as President of the Heart of America chapter of the B’nai B'rith Women. She worked with Frank in his home-building businesses, serving as interior designer and bookkeeper. In 1970, she founded Brookside Antiques. Soon her son Ron was drawn into the business, as were a number of her family and friends. We are all going to miss Mollie immensely, but her spirit remains with us and within us. She was a generous person. In lieu of flowers the family suggests contributions to Kansas City Hospice or the Alzheimer’s Association – Heart of America Chapter.

Mollie Zoglin, 97, Overland Park, KS passed away peacefully Sunday, May 25, 2014 at The Atriums. Funeral services will be at 12:00pm Wednesday, May 28 at the Louis Memorial Chapel, 6830 Troost Ave, with burial to follow at Rose Hill Cemetery. Mollie... View Obituary & Service Information

The family of Mollie Zoglin created this Life Tributes page to make it easy to share your memories.