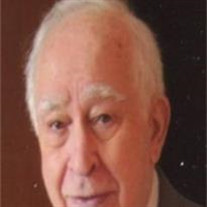 Morty Lewkowsky, 94, passed away Saturday, October 6, 2012 surrounded by family at his home in Kansas City, MO. Funeral services 11:00am Sunday, October 7 at the Louis Memorial Chapel, 6830 Troost Ave. Burial Kehilath Israel Blue Ridge Cemetery. Kindly omit flowers. The family suggests contributions to Jewish Family Services or Kehilath Israel Synagogue. Born in Bielsk-Podlaski, Poland, May 10, 1918 he was the only survivor of his family which perished in Treblinka. In 1944 Morty married Tobey (in blessed memory) and they raised three children, Riva, Izzy and Judy. They settled in Kansas City in 1961. He worked as a picture framer and established Lewkowsky and Son European Picture Framing in 1972. He continued in the picture framing business until his retirement at age 70. Morty was an active member of Kehilath Israel Synagogue where he was an Honorary Minyanaire of the Year as well as head gabbi for life. He was a past president of the Men’s Club and a member of the New Americans Club. Morty’s beloved wife of 66 years, Shayna Toba Lewkowsky, preceeded him in death. He is survived by his children: Riva Lewis (Mark Barber), Izzy (Kay) Lewkowsky and Judy (Michael) Teal; grandchildren: Erik Lewis, Shelly Lewis, Adam (Lyndsey) Lewkowsky, Kerry Hawkins, Kacey Oldham, Sarah (David) Glasser, Jonathan (Laura)Teal; great-grandchildren: Erika, Phoenix and Amara Lewis, Samuel, Joseph and Simone Glasser, Haidyn Teal and her new brother on the way; great-great-grandson: Brandon Bacon. He will be “forever in our hearts.”

The family of Mordechai "Morty" Lewkowsky created this Life Tributes page to make it easy to share your memories.