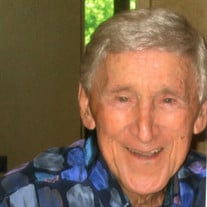 Morris Y. Horowitz, 92, passed from this life peacefully on Saturday, May 24, 2014 at Kansas City Hospice House. Funeral services will be at noon, Tuesday, May 27 in the chapel at Kehilath Israel Blue Ridge Cemetery, 1901 Blue Ridge Blvd, Independence, MO 64052, followed by burial. Morrie was born March 25, 1922 to William and Bluma Horowitz of Kansas City. He grew up in Kansas City, graduated from Paseo High School, lettering in football and wrestling. He continued his education with two years of undergraduate studies at the University of Colorado in Boulder. While growing up he and his brother, Ernest, were honored by Mayor H. Roe Bartle as the youngest two brothers to be awarded the rank of Eagle Scout in the Boy Scouts of America. He and his brother helped their father, William, feed the hungry during the Depression from Horowitz/Gargotta produce company at the city market. Morrie became a Master Sergeant in the Army Air Corps during World War II and served his beloved country until his honorable discharge in 1945. During that time he dated the love of his life, Esther Polsky. They were married in 1945 and spent 69 blessed years together. Morrie went into the family business in 1945 at Smith St. John, a restaurant equipment and supply dealer, which included Remco and Fixtures, manufacturers of stainless steel restaurant equipment and furniture. He became President of Smith St. John and Remco in 1965 and then Chairman of the Board in 1983 when his son Dennis, the third generation, took over as President. Smith St. John was awarded “The Dealer of the Year” award in 1994 by its national trade association. Morrie retired after 53 successful years when the family sold the business in 1998. Morrie always believed in helping those less fortunate and felt that education was the most important way to solve the problem of poverty. To that end, his philanthropy will always be remembered by those he helped along the way. He became deeply involved in Operation Breakthrough in his later years through the Horowitz Family Foundation he founded. He was a lifelong member and benefactor to Kehilath Israel Synagogue. Morrie was preceded in death by his beloved parents, his sister: Charlene Gelb; brother: Ernest Horowitz; brother-in-law: Norman Polsky. He is survived by his lovely wife Esther; their two sons: Mark and Dennis Horowitz; daughters-in-law: Abby Seixas Horowitz and Sue Horowitz; grandchildren: Rachel, Jessica and Eli Horowitz, Alex Paxton; sister: Anna Rose Axelrod; brother-in-law: Larry Gelb; sisters-in-law: Tobie Horowitz and Elaine Polsky. He is also survived by many beloved nieces, nephews and friends. Memorial contributions may be made to Operation Breakthrough in Kansas City, MO or Kehilath Israel Synagogue in Overland Park, KS.

The family of Morris Y. Horowitz created this Life Tributes page to make it easy to share your memories.

Morris Y. Horowitz, 92, passed from this life peacefully on Saturday,...