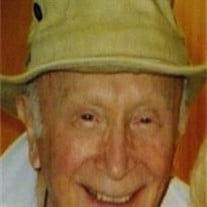 Morris Tulchinsky passed away on March 7, 2013 at age 95. Funeral services will be held at Village Shalom, 5500 W 123rd St., Overland Park, KS, March 8 at 1:30 pm. Morris was born in Krwoyozer, Russia in 1917. He, his parents and siblings came to America in 1922, where they settled in Brooklyn, NY. He went to Brooklyn College, where he received a Bachelors Degree in Education. He attended Teachers College, Columbia University, where he received a Master’s Degree in Special Education. After teaching school for a short time, Morris took a job with the Federal Government, where he would spend the majority of his career. Morris entered the U.S. Navy where he served four years during WWII. Morris was proud of his service aboard the ship USS Bexar. While stationed in Norfolk, Virginia, he met the love of his life, Eva Cohn of Kansas City. Two weeks after his discharge in May, 1946, Morris and Eva were married. Morris always said that meeting Eva was the best thing that ever happened to him. Morris had a passion for helping others. His motto was, “When somebody puts out his hand for help, you must provide it.” He exceled at communicating with people, putting them at ease, and assisting people in any way he could. To this end, he never turned anybody away and gave of himself very freely. Morris worked for the Social Security Administration for almost 40 years. In the Kansas City area, he was known as “Mr. Social Security.” As an Assistant Regional Representative, he supervised a network of offices in Iowa, Minnesota, and North and South Dakota. He also served as District Manager of the Topeka, Kansas City, KS and Kansas City, MO Social Security Districts. He received the Social Security Administration’s highest award, the Commissioner’s Citation. Morris wrote articles about Social Security and Medicare for many publications. He wrote a by-line column, “Your Social Security,” for the Kansas City Star for several years. He also authored a column, “Tulchinsky’s Tips,” for other newspapers, including the KC Jewish Chronicle. He made many TV appearances and gave many talks before civic, church, social and business groups. He lectured at pre-retirement seminars for many businesses. Even after his retirement, he continued to be called upon by the public about their retirement plans, and by the news media to explain Social Security and Medicare. In 1979, after retiring from Federal Service, Morris became Vice President and Director of Public Relations for First National Charter Bank, where he served until 1986. Helping immigrants who came to the United States was very close to Morris’ heart, in part due to his own family history. He taught classes in English to victims of the Holocaust and earned the title “King of the Refugees.” Not only did he teach them English, he became their trusted friend and ally in their new country, helping them acculturate after the traumatic events of WWII. In the 1990s he taught English to a class of elderly immigrants from the former Soviet Union. He made an audio tape to help prepare them to become US citizens. He took great pride in attending the ceremonies in which his students became citizens of the US. Many turned to Morris for help in bringing over their relatives who were still overseas but wanted to immigrate to the US. He kept detailed records of his correspondence with government agencies and Congressmen on behalf of these people. He gave freely of his time and energy to help others. Morris was the elected Senator for Jackson County of the Missouri Silver Haired Legislature, a group that advocated for senior citizens. Morris lectured weekly and was treasurer at the Shepherd’s Center in Kansas City, an organization that promotes and supports successful aging. He taught courses on Social Insurance, Social Security disability benefits, and Medicare at Avila College in Kansas City and Washburn University in Topeka. Morris was a lifetime member of the Board of Congregation Beth Shalom Synagogue where he served as Chairman of the Ritual Committee. He taught Sunday School for over twenty years and served on numerous committees at the synagogue. He often led morning services there. Morris was totally dedicated to his family and they were always his top priority. He was a devoted husband, father, grandfather, brother, and uncle. He had a quick wit and sharp sense of humor and was able to see the good in almost every situation and he instilled this positive life attitude in his children, grandchildren and great-grandchildren. Morris is survived by his children Bari Tulchinsky Efron and her husband Menash (Mike) and Karen Tulchinsky Smith and husband Bruce, and by his grandchildren Lisa Siegel, Ruhama (Ariel) Yeshurun, Noam (Leah) Efron, Hillel (Rivkah) Efron, Merav (Tzvi) Levine, Libi (Yanki) Frager, Ben-Zion Efron, and Ezra Smith, and 13 great grandchildren. Morris was preceded in death by his wife, Eva; daughter: Linda Tulchinsky Siegel; grandson: Adam Jonathan Siegel; three siblings; and one great-granddaugter Ahuva Chayn Efron. The family would like to thank the staff at Village Shalom and caregivers Kate Helm, Cathryn Billings, Yalonda Washington and Emma Holmes for the commitment and kindness they have shown to Morris and his family.

The family of Morris Tulchinsky created this Life Tributes page to make it easy to share your memories.