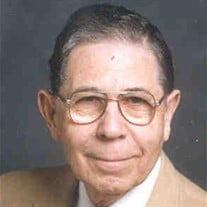 Morton “Mort” Jacobs passed away on Tuesday, June 23, 2015, surrounded by his family. Memorial services will be at 1:30 pm Friday, June 26, 2015 at Village Shalom. Kindly omit flowers. The family suggests contributions to Village Shalom. Mort was born in Kansas City, MO on October 23, 1916 to Gussie (Dolginoff) and Harry Jacobs. At the age of 15, he attended the University of Chicago on a nationally competitive scholarship, where he completed his undergraduate degree in physiology. He earned his medical degree from the University of Kansas (KU). His internship was at University Hospital in Augusta, Georgia, and his residency at the Sheppard and Enoch Pratt Hospital in Baltimore, MD. Mort was a Lieutenant in the U.S. Army Medical Service serving as Chief of Psychiatric Services at two stateside duty stations and at the 381st Station Hospital in Korea. He also spent time as a staff psychiatrist at the 34th General Hospital, Seoul, Korea. After completing his tour of duty, Mort was awarded fellowships at Johns Hopkins Hospital and School of Medicine and at the Topeka Psychoanalytic Institute. Mort then returned to Kansas City where he established the inpatient psychiatric unit at Menorah Medical Center in 1951. He held teaching positions at KU and UMKC and was in private psychiatric practice for over 30 years. Mort was active in local medical societies and served as a delegate to the Missouri State Medical Association for several years. He served as president of the Missouri Psychiatric Association and of the Western Missouri District Branch of the American Psychiatric Association (APA). He was active on a national level of the APA assisting in the selection of the first information technology system for the association. He received the Distinguished Life Fellow award from the APA in 2003. Mort’s many friends and family thought of him as a “Renaissance Man” who had boundless interests and skills and was always ready to explore new ideas and unconventional approaches to problems. He was devoted to his family and was well known for his positive attitude toward life, compassionate nature, and great sense of humor, often being the first to laugh at his own jokes. Mort was always interested in electronics, assembling his own ham radio equipment and becoming a licensed ham radio operator as a young teenager. He also became an adept pilot obtaining his instrument rating on twin-engine aircraft, and was an accomplished photographer. Other hobbies and interests included chess, computers, golf, tennis, reading, and enjoying time with his family. Mort was a lifelong member of The Temple, Congregation B’nai Jehudah, where he was confirmed and married. Mort lost his beloved wife, Marjorie, in 2009 after 69 years of marriage and brother Leon in 2014. He is survived by daughters: Patty (Gene) Settle of Tucson, AZ and Julie (Greg) Sizemore of Leawood; four granddaughters: Kristin (Steve) Schneller, Whitney (Mark) Mourlam, Merritt Sizemore (Fiancé: Michael Rawitch), and Jaime Settle; great-grandsons: Calvin & Jack Schneller; and several nieces and nephews. The family would like to thank Village Shalom for the dedicated care Mort received during the last several years of his life. He had been a resident of Village Shalom since 2006.

The family of MORTON JACOBS created this Life Tributes page to make it easy to share your memories.