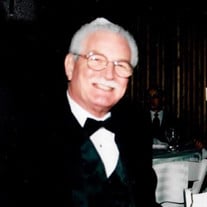 Morton Mayer Spack passed away unexpectedly and peacefully in the early hours of August 23, 2021. Morton was born to Eva and Dave Spack on June 20, 1932, at Menorah Hospital. Morton graduated Paseo High School in 1949; he played on the basketball team and was All City and All State. Morton also won several awards for Sporting Excellence. Morton attended the University Missouri at Columbia. Following 5 1/2 years at Mizzou, he left college and joined the Army, where he served for six whole weeks before he received an Honorable Discharge In the Summer of 1956, Morton was set up on a blind date with Leta Roth. After a short courtship they married on April 6, 1957. Leta and Morton were married for 62 years until Leta’s death. Morton worked for Century Laboratories where he had a hand in building the company for nearly 40 years. Following the sale of Century to Lady Baltimore, Morton was on the management team that continued to run the company for several years. Upon retirement from Century, Morton operated L+M Distributing until his passing. A self-professed “jock,” Morton’s passion was sports of all kinds—he excelled at basketball, golf, bowling, scuba diving, volleyball and he loved his weekend tennis matches at Meadowbrook Country Club. Later in life he enjoyed his “work-outs” with his friends at the J. Morton loved traveling the world, great food, poker, and being surrounded by his friends. Morton was happiest at his house and on his boat at the Lake of the Ozarks. Morton’s survivors include: Son and Daughter in law, Paul and Ileen Spack, of Overland Park and Houston, son Brian Spack of Houston, grandchildren, Aaron Spack of Houston and Zoë Spack of Austin. He also leaves his sister, Rachel Kurz of Leawood, sister and brother-in-law Elaine and Jerry Kisluk of Houston. Morton was predeceased by his wife, Leta, his parents, his beloved Mother and Father-in-Law, Anna Rose and Max Roth, his sister and brother-in-law, Helen and Myron Levy, his brother and sister in law Sol and Marge Felman, and his brother in law Barney Kurz, and too many friends to enumerate. In lieu of flowers the family asks for donations to be made in Morton’s memory to: Unleashed Pet Rescue, Great Plains SPCA, or the charity of your choosing. Morton was a good and honorable man. One would be hard-pressed to find anyone to do anything besides praise Morton, and easy to find those who have wonderful, warm stories about him. We will all miss Morton and his laughter. A memorial service will be held on at 10:30 am on October 11th, 2021 at Louis Memorial Chapel, with interment thereafter at Rose Hill Cemetery.

Morton Mayer Spack passed away unexpectedly and peacefully in the early hours of August 23, 2021. Morton was born to Eva and Dave Spack on June 20, 1932, at Menorah Hospital. Morton graduated Paseo High School in 1949; he played on the... View Obituary & Service Information

The family of Morton Mayer Spack created this Life Tributes page to make it easy to share your memories.

Morton Mayer Spack passed away unexpectedly and peacefully in...