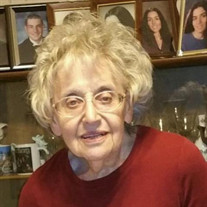 Muriel Chait, age 94, formerly of Brooklyn, NY, died peacefully on July 9, 2020, at Village Shalom, Overland Park KS, where she had resided for the past three years. Graveside services were held on Long Island on July 12, 2020. Muriel lived a long and fulfilled life. She was born in Brooklyn on September 1, 1925 and grew up with parents Celia and Saul and siblings Ruth and Stanley in a home that was very welcoming to friends and family. She often reminisced about how she played the piano, her sister tap-danced and her brother played the drums or guitar to entertain visitors. She maintained an open, welcoming home her entire life with family and friends having fond memories of very competitive Scrabble games, lots of sing-alongs around the piano, and many bowls of chicken soup offered. Her family and friends looked forward to the original poems and drawings she sent for every birthday, anniversary, and other occasions. Muriel was the heart and soul of her family. She was generous and warm-hearted as well as independent and resourceful. She persevered after the untimely deaths of her sister and brother, and after being widowed young when her beloved husband, Morris, passed away at age 49. She developed a close bond with her late sister-in-law Fay. They were neighbors in their two family house and in later years often traveled together and volunteered together for ORT America. She enjoyed dinners out and movie dates with her boyfriend, Aaron, until his death in 1998. Muriel had boundless energy, taking the subway to work until she was 75 years old. Some of her coworkers from years ago maintained lifelong friendships with Muriel as she developed long lasting, caring relationships throughout her life. She lived independently in the same house in Brooklyn for over 60 years, until she was 91 years old. Muriel strongly believed in the importance of education. That was reflected in her volunteer work as the President of her synagogue’s Hebrew School PTA during her daughter’s childhood and later as President of her local chapter of ORT America. She was educated in NYC public schools, graduated from Lafayette High School at age 16, and attended classes at Brooklyn College. Muriel is survived by her daughter Barbara and husband Richard, granddaughter Maureen and husband John, grandson Michael and wife Bekah, grandson Matthew, great-grandchildren Carter, Owen, Isaiah, and Aria, nieces Bonnie, Susan and husband Greg, and Stacey, nephew Marc and wife Sarah, family friends Ronni and husband John, and cousins and grand nieces and nephews. In her later years she was thrilled that her immediate family consisted of ‘Four Generations’ with the addition of the great-grandchildren who were the light of her life. Muriel’s family wishes to extend our heartfelt thanks and gratitude to the wonderful, dedicated staff at Village Shalom who cared for her with so much love and compassion during her final years. Donations in Muriel’s memory may be made to Village Shalom (villageshalom.org) or to ORT America (ortamerica.org) or to the charity of your choice.

The family of Muriel Chait created this Life Tributes page to make it easy to share your memories.