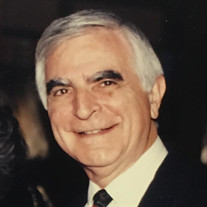 Nedwyn R. Nelkin, 89, of Leawood, KS, passed away peacefully on Sunday, April 24, 2016 surrounded by his loving family. Funeral services will be at 2:00pm Wednesday, April 27, 2016 at The Louis Memorial Chapel, 6830 Troost Avenue with burial to follow at Rose Hill Cemetery. In honor of his memory, contributions may be made to an organization of one’s choice. Ned was born March 5, 1927 in Kansas City, MO, the son of Sam and Helen Nelkin. He remained a resident of the Kansas City area his entire life. Ned worked in his father’s fur store in the summers from the age of seven. His father passed away at age 39, leaving Ned head of the household, including his mother and three sisters, at the tender age of fourteen. He graduated from Paseo High School at the age of sixteen, and attended junior college for a year and a half. When he turned seventeen, Ned enlisted in the United States Navy and served in World War II. After his education in the Navy, he received his college education through the G.I. Bill at the University of Missouri – Columbia, first finishing his undergraduate degree and then completing law school. Ned did not practice law until many years later after retiring from 40 years in business with his uncle, Henry Nelkin, at Piper Brace Co/Nelkin Medical Products. Ned then practiced business law for seven years. During his time in law school, he met Coralyn Stephens, who was attending Stephens College, and they were married in August of 1950. After thirty seven years of marriage, Coralyn passed away in 1988. In June of 1990, Ned married Shirley Kranzberg, his wife of twenty-five years. Ned served on the Board for the Jewish Community Center. He was a longtime member of The Temple, Congregation B’nai Jehudah. Ned was preceded in death by his beloved parents, his wife, Coralyn, his daughter Sherry Lee Nelkin and his sister, Hope Braeman. He is survived by his wife, Shirley; his children: Ken and Teresa Nelkin, Joy and Scott Wieder; his children by marriage: Sheldon Kranzberg, Lynn Shafton, Brian Kranzberg; his grandchildren: Ryan and Savannah Nelkin, Melissa and Travis Dietrich, Cory and Namita Nelkin, Shira Wieder, Seth Wieder, Carly Wieder; his grandchildren by marriage: Perry Kranzberg, Alex Kranzberg, Adam Shafton, Daniel Shafton, Taylor Kranzberg; four great-grandchildren; sisters: Carol Weissman, Barbara Hirsekorn; brother-in-law: Fred Hirsekorn. He is also survived by many beloved nieces, nephews and friends.

The family of NEDWYN RONALD NELKIN created this Life Tributes page to make it easy to share your memories.