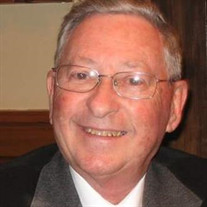 Neuman D. Stern, 80, of Bucyrus, KS, passed away Tuesday, March 7, 2017 at Menorah Medical Center. Funeral services will be 11:00am Thursday, March 9, at The Louis Memorial Chapel, 6830 Troost Avenue, Kansas City, MO 64131 with burial to follow at Rose Hill Cemetery. In lieu of flowers, the family suggests contributions to the Merriam, KS chapter of the SPCA or a charity of one’s choice. He was born April 25, 1936 in Kansas City, MO, the son of Morris M. and Gertrude (Maizel) Stern, was a lifelong area resident and graduated from Shawnee Mission High School. For over 30 years, Neuman owned “Stern and Associates”, a source for specialty plumbing needs. He also owned the “Mission Pit BBQ” restaurant in Mission, KS for over 25 years. Neuman was a member of the NRA, the DeMolay service organization and was a former member of The Temple, Congregation B’nai Jehudah. He was very dedicated and loving to his family and was a hard worker. His word was his bond. Neuman greatly enjoyed family gatherings. He was an avid basketball fan, especially for KU. Neuman loved to vacation in Colorado and enjoyed raising horses at his farm near Hillsdale, KS. He was preceded in death by his father, Morris Stern. Neuman is survived by his wife of 12 years, Madeline G. Stern, of the home; daughters and sons-in-law: Kimberly and Robert Smith, Dalton, GA; Elaine and Dave Hernstrom, Stillwell, KS; his mother: Gertrude Stern, Mission, KS; brother and sister-in-law: Philip S. and Mary Stern, AllensPark, CO and his sister and brother-in-law: Jaclyn and David Beaulieu, Overland Park, KS; also surviving are numerous nieces and nephews.

The family of NEUMAN DONALD STERN created this Life Tributes page to make it easy to share your memories.