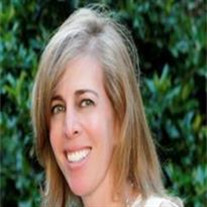 Our beloved Nicole Abend Nenon left us on July 9, 2012, passing away unexpectedly and peacefully in her sleep. Funeral services will be held at Louis Memorial Chapel, 6830 Troost, Kansas City, MO on Sunday, July 15, 2012 at 10 a.m. followed by burial at Rose Hill Cemetery. The family requests no flowers and suggests contributions to the Nicole Abend Nenon Charitable Fund, c/o Jewish Community Foundation, 5801 W. 115th Street, #104, Overland Park, KS 66211 or the charity of your choice. Born in Tulsa, OK on January 15, 1966, the daughter of Sama Hoffman and Melvin Abend, Nickie and her family moved to Kansas City when she was a child. The youngest of three girls, Nickie was vivacious, bright, beautiful and filled with enthusiasm. She graduated high school from Sunset Hill and attended the University of Texas, graduating in 1988. She continued her education at the UT LBJ School of Public Policy, graduating in 1992. She married the love of her life, Chris Nenon, on March 20, 1994 and was an amazing wife, mother and caregiver to all. Nickie and Chris brought three marvelous children into the world, Jordi, Devon and Cole. Chris’ career took them to many US cities, most recently to Ft. Worth, TX and, for the last three years, to Beijing, China. Wherever they lived, Nickie made it a point to be involved unselfishly and positively in the world around her including the Ft. Worth Jewish community and most recently with the Beijing United Hospital Charities and as a member of her lay led Jewish community of Kehillat Beijing where she served on the Board of Directors. In her too short life Nickie made lasting friends everywhere she went. She was devoted to her family, friends and community and enriched the lives of all whom she touched. Nickie is survived by her parents, Sama Hoffman, Naples, FL and Melvin Abend, Kansas City, MO, husband Chris Nenon, daughters Jordi and Devon and son Cole Nenon, Mother-in-law Patricia Wrape Nenon of Memphis, TN, sisters Janna Pinsky (Steve) of Rockville Centre, NY, Denise Abend Chamblee (Gary Tanner) of Newport News, VA and Chris’s brothers and sisters, Thomas Nenon (Monika), Patricia Miklos (Coffee), Edward Nenon (Carroll), Judy Girardeau (John), David Nenon (Karen), Philip Nenon (Susan), Elizabeth Frances Nenon. Nickie’s extended family includes Aunt and Uncle, Ruthie and Harold Tivol and other numerous relatives including nieces, nephews and cousins.

Our beloved Nicole Abend Nenon left us on July 9, 2012, passing away unexpectedly and peacefully in her sleep. Funeral services will be held at Louis Memorial Chapel, 6830 Troost, Kansas City, MO on Sunday, July 15, 2012 at 10 a.m. followed... View Obituary & Service Information

The family of Nicole Abend Nenon created this Life Tributes page to make it easy to share your memories.