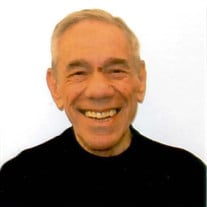 Norman R. (Bob) Horwitz, 90, died peacefully, March 10th, 2022 at his home, Town Village from complications of COPD. Beloved son, brother, husband, father, grandfather and great grandfather. He was born August 29, 1931 in Kansas City, MO., the son of a butcher from Poland, William Horwitz, and Mary Rovick Horwitz from St. Joseph, MO. He was the younger brother to Rita Kahn, his beloved sister. Bob was an Eagle Scout in Troop 61, Warrior in Tribe of the Mic-O-Say. Bob graduated Paseo High School in 1949 and played on the football team. He enlisted in the army in 1950 and was in the 82nd Airborne Division as a paratrooper stationed at Fr. Bragg, NC. From there, he went to the island of Eniwetok and viewed the atomic and hydrogen bomb tests. Bob attended school at KCJC after the war, worked for his Uncle Arthur Rovick in his army surplus store, was a milk man and then teamed up with Ed Gerson to form Edcor Safety Fire & Safety Equipment for 25 years. Bob served as Overland Park councilman for 4 years beginning 1971. He served as President of the National Association of Fire Equipment Distributors in 1972. He worked for Zep Manufacturing for 10 years. And finally he established his own business, US Fire Cabinets & Accessories for 25 years, retiring at the age of 85. Bob and Marcia were married for 60 wonderful years. Bob enjoyed sailing at Lake Perry and many other world travels. Bob took care of his beloved Marcia before her passing in 2015 then moving to Town Village Senior Living, where he spent the last 4 years, reacquainting with old friends and making new ones. He loved it there. Bob is survived by his daughters, Sherri (Arnold), Kim (Max deceased); son, Jeff (Juan). Five grandchildren Daniel (Anna), Nathan (Jaimi), Zachariah (deceased), Gavriella (Tom), Katriel (Becky). Eight great grandchildren, Pierce, Charlie, Max, Vivian, Josie, Rex, Emma, Levi. Services will be held at Mt. Carmel Cemetery at 10 am, in the Mt. Carmel Yukon Chapel, 5529 Ditzler, Raytown, MO.

The family of Norman R. (Bob) Horwitz created this Life Tributes page to make it easy to share your memories.