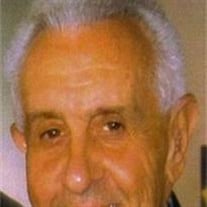 Norman Polsky, a Kindest Kansas Citian award recipient and community leader, passed away at the age of 86 on September 2, 2010 after a long illness. Funeral services will be at 2:30pm Sunday, September 5, at Beth Shalom Synagogue, 9400 Wornall Rd., Kansas City, M0. Burial at Mt. Carmel Cemetery. In lieu of flowers, the family suggests contributions to the Joel Polsky Youth Fund at Beth Shalom Synagogue, 14200 Lamar, Overland Park, KS 66223 or a charity of one’s choice. He was born in Kansas City, MO on January 31, 1924 to Rachel and Isadore Polsky. Norman was an infantry officer in the US Marine Corps in World War II. Norman was training to ship out to Japan and often said that Harry Truman saved his life and millions of others. While stationed in Los Angeles, he met his future bride, Elaine Broudy, and proposed after only two dates. In keeping with his patriotic sensibility, they married on the Fourth of July, 1946. They had a daughter and three sons producing three granddaughters and two grandsons. Norman graduated from UCLA in Business with four years of engineering at Junior College of Kansas City and Purdue University. He was chairman of Fixtures Furniture, a company which manufactures commercial furniture which he founded in 1947 and sold in 1996. Norman was a member of the Young Presidents Organization (YPO) until 1974. While a member of YPO, he took advantage of their purpose to exchange ideas and through education, with the best resources in the world, to become a better chief executive officer. He attended more seminars than any other individual in YPO history. Through YPO he became involved in Junior Achievement (JA) and served as the first National YPO-JA Chairman. For JA of Kansas City, he was Director of the Year, Vice-President of Special Projects and Public Relations and in 1989 was given the Bronze Leadership Award. In 1982, Norman & Elaine’s son, Joel Polsky, died, and in his memory, they established nine substantial endowments. Norman believed the benefits in philanthropy are circular, as each individual is a benefactor as well as a beneficiary. Norman’s philosophy and creed, as written, expounds on physical fitness, positive mental attitude, continued learning, ethical conduct and hard work to earn his right to enjoy the benefits of this great country and to put back into society through giving of his time and other resources. The Polsky Family Supporting Foundation (PFSF) was established in December 1990 and currently has nearly 50 endowments. In 1999, Norman created the “Polsky Practical Personal Enrichment Series” at Johnson County Community College (JCCC) on subjects not taught in school and presented by successful community leaders and open to the public free of charge, at the Polsky Theater. Norman received one of his industry’s highest honors when he was inducted as the first Honorary Fellow of the American Society of Interior Designers in August 1993. He was asked to be an Old Master at Purdue University in 1992 to relate to the students his success criteria, which are: organize-fast-long hours; continued learning; networking building relationships, integrity every day of life; and maintain a sense of humor. Norman was awarded the 1989 Distinguished Alumnus-of-the-year for the Metropolitan Community Colleges of Kansas City Alumni Association and received the 1996 Alumni Award from the Missouri Community College Association. The Business and Institutional Furniture Manufacturer’s Association (BIFMA) appointed Norman a director from 1978 to 1987 and the Chamber of Commerce of the United States appointed him in 1979 to the 30 person Panel on Product Liability. Among Norman’s greatest legacies were his monthly investment articles showing how to achieve financial independence through mutual fund investing. These articles were mailed and passed out to thousands along with his famous Squeeze Norm flashlights. Norman was preceded in death by his son, Joel and his granddaughter’s husband, David De Simone. He is survived by his loving wife of 64 years, Elaine Broudy Polsky, of Leawood; daughter Karen Kent of Aspen, CO; son and daughter-in-law Larry and Ellen Polsky of Leawood; son Steve Polsky and partner Mark Oliver of San Francisco; granddaughter Autumn Kent De Simone; granddaughter and husband Renee & Larry Silver; granddaughter and husband Jennifer & Adrian Salazar; grandson Joseph Polsky; and grandson Gabriel Oliver-Polsky. He is also survived by his sister and brother-in-law Esther and Morris Horowitz; and brother-in-law and sister-in-law Irv and Bonnie Broudy as well as nephews, cousins and friends. The family would like to express their heartfelt appreciation to Drs. Gus Eiseman, John Goldberg and Alexander Davis; Natalie Schneider and her staff; caregivers Creola Battle and Evelyn Williams and especially Norman’s associates, Trish Lackey, Bob O’Halloran and mentee, Milton Brod.

Norman Polsky, a Kindest Kansas Citian award recipient and community leader, passed away at the age of 86 on September 2, 2010 after a long illness. Funeral services will be at 2:30pm Sunday, September 5, at Beth Shalom Synagogue, 9400 Wornall... View Obituary & Service Information

The family of Norman Polsky created this Life Tributes page to make it easy to share your memories.