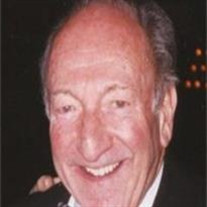 Norman Benjamin Kahn, 92, of Kansas City, Missouri, died on the 13th of June, 2011, at St. Luke’s Hospital in Kansas City, MO after a short illness. Funeral services will be 3:00 PM, Wednesday, June 15th at the Louis Memorial Chapel, 6830 Troost Ave., Kansas city, MO 64131, 816-361-5211. Burial following the service will be at Mt. Carmel cemetery, 5529 Ditzler Ave., Raytown, MO 64133 (816-353-4196). In lieu of flowers, the family suggests contributions to the Norman B. Kahn Visionary Fund at the Jewish Community Foundation. Mr. Kahn was born in the Chicago Lying-In Hospital on August 25, 1918 to Harry and Ida Kahn, who were in the dry goods business in Chicago. Norman described the family’s move to the second floor above the store as their first steps in “upward mobility.” Norman was 15 when in 1933, during the Great Depression, the family moved to Kansas City MO to be near other family members. He attended Paseo High School and was a member of Boy Scout Troop 61 chartered to Beth Shalom Synagogue. Mr. Kahn first attended the Kansas City Junior College, followed by the University of Missouri, Columbia. At the outbreak of World War II, he had left his employment with Sonken Galamba Metals in Kansas City, KS to enlist in the Army Air Corps. Grounded due to an ear abnormality, he completed training in Lincoln, Nebraska as an instructor in “pre-flight” mechanics, preparing B-25 bombers in Ypsilanti, Michigan, and at the end of the war in Seattle, Washington. On November 23, 1944, Norman married Sybil Kahn (no relation), whom he had met when she was a student at Stephens College in Columbia, MO. Following their wedding, Sybil completed her studies at the University of Michigan and Norman returned to his responsibilities in the Army Air Corps. After the war, Mr. Kahn returned to Kansas City where he resumed his employment with Sonken Galamba Metals and worked his way up to sales manager, launching his career in the steel industry. In 1955, he joined Brown Strauss Steel Company in Kansas City, KS as President of the new steel division, soon becoming President of the company. Norman led the sale of Brown-Strauss in 1973 to Azcon Steel, the North American arm of the multi-national company Consolidated Gold Fields Ltd, with offices in New York City and London. Norman served as President of Azcon and sat on the Board of Directors of Consolidated Gold Fields for ten years. Following his tenure at Consolidated Gold Fields, he started Kahn Steel Co., which he soon sold to Levinson Steel of Pittsburgh, PA. In 1988, he joined his sons Fred and Ted, who began a new incarnation of Kahn Steel Company. Always focused on education, Norman served as president of the Board of the Westwood View School in Fairway, KS, where he encouraged innovations in this single-school district, such as non-graded classrooms and Spanish language education in the early grades. At age 65, Mr. Kahn received his Masters Degree in Business Administration from Rockhurst University in Kansas City, MO. He then taught in the MBA program and served on the Rockhurst Board of Regents for many years, including as its Chair. He served for many years on the Boards of Penn Valley Community College, Merchants bank, Brotherhood State Bank, Menorah Hospital, YMHA, Jewish Family Services, and was a life member of the Jewish Community Foundation. Norman was a lifelong supporter of art and music. He was serving as President of the Board of Directors of the Kansas City Philharmonic Orchestra when he led its closure in its 49th year, transitioning to the current Kansas City Symphony Orchestra. He was particularly interested in bringing the symphony to youth, starting the “Coke Concerts” in the 1950’s, a forerunner of the Young Audience program that continues to serve Kansas City’s schools. Norman served as Treasurer and then Vice-president of the Kansas City Symphony Foundation until his death. Norman was the first male docent at the Nelson Atkins Museum of Art, a role he relished for more than 20 years, specializing in tours for schoolchildren. He and his wife Sybil founded the Museum Without Walls which provides museum quality exhibitions in public spaces. A portrait of Norman by his friend Andy Warhol currently hangs in his home, having been displayed at the Kemper Museum of Contemporary Art shortly before his 90th birthday. Norman’s family and friends will always remember his 60th birthday party, a catered black tie affair with a live orchestra, held in his steel warehouse in Kansas City, KS, on the exterior wall of which was displayed an extensive mylar “light sculpture” by the renowned local artist Dale Eldred. Not to be forgotten, his 90th birthday gala took over the Kemper Museum of Contemporary Art, where several commissioned pieces by local artists were displayed in his honor. While the community considered him a business icon, entrepreneur, community leader, supporter of the arts, and contributor to Jewish and community causes, his family and friends considered him a charmer, with a sweet nature that drew people to him. Indeed, more than once he would frustrate business contacts, but remain friends with them. Mr. Kahn was a lifelong member of Congregation Beth Shalom, and had for many years been a member of The Temple, B’nai Jehudah, Ohev Shalom and Kehilath Israel Synagogues, as well. Norman was preceded in death by his parents, his brother Lester Kahn and sister Betty Kahn Dowdy. He is survived by his loving wife of 66 years, Sybil Kahn, of the home; sons Norman Kahn Jr (Diana) of Prairie Village, KS; Fred Kahn (Sherri) of Bucyrus, KS; Ted Kahn (Anette LeBlanc) of Steamboat Springs, CO; daughter Barbara Kahn of Cambridge, MA; grandsons Fred Milton of Kansas City, MO; Brian Milton of Overland Park, KS; Max Kahn of Montara, CA; Nathan Rothe of Boulder, CO; and granddaughters Abigail Kahn of Berkeley, CA; Nichole Rothe of Steamboat Springs, CO; Rachele Rothe of Denver, CO; and Kara Kahn of Bucyrus, KS. “If I am not for myself, who is for me? When I am only for myself, what am I? If not now, when?” Hillel (The Mishna)

The family of Norman Benjamin Kahn created this Life Tributes page to make it easy to share your memories.

Norman Benjamin Kahn, 92, of Kansas City, Missouri, died on the...