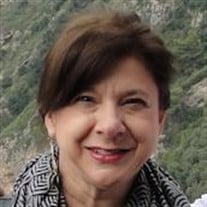 Mrs. Pamela “Pam” Beth (Linder) Gollub died peacefully in her home on Thursday, August 31, 2017 in Overland Park at the age of 58 after a 5-month battle with gastric cancer. She was surrounded by her family who remained at her bedside during her final days. Pam is survived by her husband Steven Gollub, Overland Park, KS; children, Alyson Hendry (31), Elliot Hendry (27), Isaac Hendry (24), Francine Gollub (23), and her mother, Sylvia Linder, St. Louis, MO. She is preceded in death by her father, Daniel Linder. Pam was born on July 14, 1959 in Granite City, IL to Sylvia Linder and Daniel Linder. She was passionate about helping others, especially children and families. She was a dedicated, hard working mother to her three children, and could often be found at the ball fields, running carpool to the various after school activities, or visiting her children’s schools for celebrations and ceremonies. In 2008, she married Steve, her childhood crush from summer camp and moved to Overland Park, KS where she and Steve began their life together. Pam became a proud and loving stepmother to Francine; Pam and Steve worked hard to blend their two families. They were passionate travelers and visited many countries around the world as well as exciting hiking trips around the many National Parks of the United States, including hiking rim-to-rim at the Grand Canyon twice. They were proud pet parents of their treasured Australian shepherd, Gina, who brought them so much joy. She was a loyal, caring friend to many, and can be described as the “person who lights up the room.” A funeral is scheduled for Sunday, September 3, 2017 at Berger Memorial Chapel located at 9430 Olive Blvd, St. Louis, MO 63132 at 1:30pm. A shiva will follow at her sister, Lori Linder’s home. Details can be found at www.bergermemorialchapel.com. Rabbi Randy Fleisher will officiate the ceremony. All are welcome to attend and celebrate Pam’s life. In lieu of flowers, please send donations to American Cancer Society or your favorite cancer support/research organization. Condolences can be sent to 10224 Catalina Street Overland Park, KS 66207.

Mrs. Pamela &#8220;Pam&#8221; Beth (Linder) Gollub died peacefully in her home on Thursday, August 31, 2017 in Overland Park at the age of 58 after a 5-month battle with gastric cancer. She was surrounded by her family who remained at her bedside... View Obituary & Service Information

The family of PAMELA "PAM" BETH GOLLUB created this Life Tributes page to make it easy to share your memories.