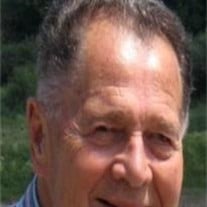 Paul Flam, 90, a long-time resident of Kansas City, passed away on Saturday, February 9, 2013 at his new home in Providence RI. Funeral services will be held 2:00pm, Thursday, February 14 at Louis Memorial Chapel. Burial will follow in Mt. Carmel Cemetery. Shiva will be held Thursday evening from 7-9 pm at Town Village in Leawood, KS and Friday 2-4pm at the home of his daughter, Nina Shik. Contributions in his name can be made to the Doris Flam Early Childhood Arts Fund of Congregation Beth Shalom or the Jewish Community Center of Greater Kansas City. Born in Baltimore, MD in 1922, son of Abraham Flam and Rose Kwash, Paul graduated from City College High School at age 16, Johns Hopkins University at age 20, and later received a Master's Degree from M.I.T. He enlisted in the Army Air Corp. and served as an electronics officer in the Pacific Theatre on Guam and Iwo Jima. Following the war, Paul remained with the Air Force as a civil servant and reservist until he retired in 1979, having earned the highest civil servant rank granted by the Air Force Communications Service. Paul was married to Jeanne Rosenthal Flam, with whom he had two children, from 1944 to her death in 1970. After his retirement from the Air Force, Paul embarked on a new career with his second wife, Doris Lichtor Flam. Until her death, they coordinated guided tours for groups of teenagers and adults to destinations around the world, including many trips to Israel. Paul shared his love of books, travel and current events with his third wife, Bea Firestone Flam, who died in 2009. An active member in the Kansas City Jewish community, Paul served on the board of Congregation Beth Shalom and was a leader in the Jewish Federation, the Jewish Community Center, CAJE and Museum without Walls. He is survived by his children, Alan Flam and wife Judy Semonoff; Nina Shik and husband David Shik, stepchildren Drew, Douglas and Jeffrey Levine and husband Reed Fletcher. He is also survived by five grandchildren, Lucy, Ezra and Gabriel Semonoff Flam, Jonathan Shik, Sarah Lamdan and husband Eyal, and two great grandchildren, Benjamin and Evelyn Lamdan.

The family of Paul Flam created this Life Tributes page to make it easy to share your memories.

Paul Flam, 90, a long-time resident of Kansas City, passed away...