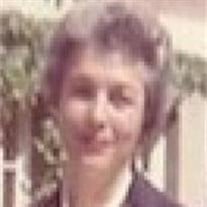 Mrs. Peggy-Ann Biel Benjamin, 84, died peacefully at Village Shalom, Overland Park, KS on February 6, 2012. She was the wife of the late Alan K. Benjamin, the daughter of the late Edward J. Biel and Joan Ascheim Biel, New York. Peggy was an artist. She was a graduate of Smith College, Northampton, Massachusetts. She was the founder of the New Reform Temple, a contributor to Temple Emanu-El, New York. During her lifetime she served on many boards of directors including The New Reform Temple, the Menorah Hospital Auxiliary, the Council of Jewish Women, the Naturalization Council, the Rehabilitation Institute of Kansas City, the Smith College Club, and the American Association of University Women. She was an Associate of the Metropolitan Museum of Art, New York, a member of the Friends of Art of the Nelson-Atkins Museum of Kansas City, the Spencer Museum of Lawrence, Kansas, the Jackson County Historical Society, a Sustaining member of the Republican National Committee, and the English Speaking Union. She leaves a daughter, Ellen J. Benjamin, Santa Cruz, CA, a son Alan K. Benjamin, Jr., Playa Vista, CA, and two grandsons, Joseph K. Benjamin and Graham W. Benjamin. In lieu of flowers, Peggy has requested that contributions be made to the Annual Fund of the Nelson-Atkins Museum of Kansas City. Peggy was a joyful soul who loved her family with purity. A Memorial Service will be held on Sunday, March 18, 2012 at 1:00pm at the New Reform Temple, Gregory & Main, Kansas City, MO.

The family of Peggy-Ann Biel Benjamin created this Life Tributes page to make it easy to share your memories.