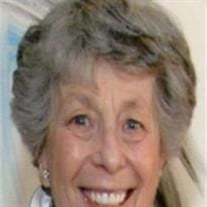 Peggy Paddor Krigel, 81, died Monday at Village Shalom. She was born on Valentine’s Day in 1929 to Margaret and Sam Paddor in Chicago, Illinois. She attended the University of Illinois and received a degree from the University of Missouri-Kansas City. At the time, Peggy was one of the few women to study business, a discipline dominated by men. She met and fell totally in love with Richard Krigel while attending the University of Illinois. They married and moved back to Kansas City where they owned and operated Krigel’s Jewelers from 1949 through 2001. They were a team—in work, at home and with friends. Peggy and Dick completed each other with the best of their qualities: honesty, compassion, caring for everyone, and hard-working. Both possessed a passion to mentor everyone from their employees to their family members. They taught by example and by constantly asking questions. It was never about them. It was always about the other person. Peggy was remarkable in her management skills to manage the financial end of the jewelry business which grew to 23 stores in 5 states. Peggy retired in 1998, but did not rest. She began a career as a volunteer for charitable organizations. She drove to elementary schools and worked with children through the Youth Friends Program. She was President and a board member of the Jewish Family Services, and a board member of the Kansas City Jewish Museum. She was the President of the homes association for her condo in Colorado and an officer with the homes association for her Kansas City condominium. Peggy liked to say the she was no ordinary grandmother—she was never afraid to ask questions, challenge others, and rock the boat when necessary. In her spare time, of which there was little, she adored her two sons, their wives, her grandchildren and her one great-granddaughter. They were the beneficiaries of her wisdom and of the examples she set each and every day. Peggy Krigel was predeceased by her husband of more than 50 years Richard Krigel, her parents Margaret and Sam Paddor, and her brother and sister- in-law Harold and Lorraine Paddor. She is survived by her sons and daughters-in-law Scott and Susan Krigel, Sandy and Erlene Krigel, and by her grandchildren Jason Krigel, David Tanury, Debbie Krigel, Lara Krigel Pabst, Ben Pabst, Ari Krigel, Beth Lapman Krigel, Steven Krigel and by her great-granddaughter Norah Pabst. She is also survived by many Krigel and Paddor cousins and by many friends, co-workers and business associates who loved and adored her. Funeral services will be at 2:00pm Tuesday, December 14, at The Louis Memorial Chapel, 6830 Troost Avenue. Burial at Rose Hill Cemetery. In lieu of flowers, please consider a contribution in Peggy’s memory to Jewish Family Services, Village Shalom or the Kansas City Jewish Museum.

Peggy Paddor Krigel, 81, died Monday at Village Shalom. She was born on Valentine’s Day in 1929 to Margaret and Sam Paddor in Chicago, Illinois. She attended the University of Illinois and received a degree from the University of Missouri-Kansas... View Obituary & Service Information

The family of Peggy Paddor Krigel created this Life Tributes page to make it easy to share your memories.

Peggy Paddor Krigel, 81, died Monday at Village Shalom. She was...