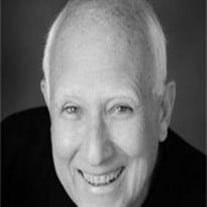 Peter Gerson, 83 of Mission Hills, Kansas and Aspen Colorado passed away Wednesday night, October 10, 2012 due to complications from pancreatic cancer, diagnosed 18 months ago. His memory will be honored with a 2:00pm memorial service Thursday, October 18th, at The Temple, Congregation B’nai Jehudah in Overland Park. In lieu of flowers, the family suggests donations in memory of Peter be made to Jewish Community Foundation and mailed to Jewish Community Foundation of Greater Kansas City, Peter Gerson Scholarship Fund, 5801 W. 115th Street, Suite 104, Overland Park, Kansas 66211. Peter was born August 21, 1929 in Duisburg, Germany. He came to the United States in 1937 at age 9 along with his brother Kurt and parents Oscar and Antonie Gerson. Peter attended Southwest High School and graduated from the University of Pennsylvania, Wharton School of Business. He joined the family wholesale jewelry business, The Gerson Company, in 1952 and had a sales territory of Oklahoma and Kansas selling fashion jewelry to retail stores. Together with his brother Kurt, they provided the leadership and direction in building the family business into one of the largest wholesale jewelry companies in the United States. His entrepreneurial spirit led the Company in additional directions and laid the foundation to what is today a diversified, third generation, now 70 year old, owned and operated corporation. After dedicating over 50 years to the business, he began spending more time in Aspen, Colorado, “his paradise”, cherishing all four seasons. He was the ultimate athlete and adventurer. He skied, biked, swam, hiked, practiced yoga, and would love to go mushrooming in undiscovered places. Peter was a voracious reader and travelled the world throughout his lifetime. Above all else, Peter’s greatest love was his family, which includes his wife Julie, 3 children and their spouses, and 8 grandchildren. He is survived by wife Julie of 55 years, daughter Liz and husband John Hjalmarson, son Jim Gerson and wife Katie, son John Gerson and wife Lynn. He relished the time spent with his grandkids Sara, Kathryn, and JJ Hjalmarson, Jacob and Elizabeth Gerson, and Hannah, Ellie, and Jack Gerson. Peter maintained a life-long passion and commitment to myriad organizations in the community. Jewish philanthropies and the Arts, such as the KC Symphony, Harriman-Jewell Program, The Nelson-Atkins Museum, and the Aspen Music Festival were most important. A shiva service will be held Thursday evening at the home of Peter and Julie Gerson. Contact the funeral home for more information. Peter’s wishes are that his body be cremated, and his ashes will be scattered in Aspen.

Peter Gerson, 83 of Mission Hills, Kansas and Aspen Colorado passed away Wednesday night, October 10, 2012 due to complications from pancreatic cancer, diagnosed 18 months ago. His memory will be honored with a 2:00pm memorial service Thursday,... View Obituary & Service Information

The family of Peter Gerson created this Life Tributes page to make it easy to share your memories.