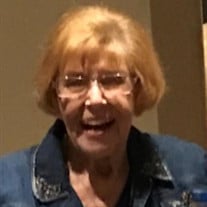 Phyllis Elston Brod, 96, of Overland Park Kansas, passed away Friday March 5, 2021 peacefully at Prairie Elder Care in Overland Park. Phyllis was born in Kansas City, Missouri to Rose and Herman Saizow. She graduated from Southwest High School and later went on to Business school, and became a secretary known for her speedy typing skills. While on a trip to St. Louis, Missouri Phyllis was introduced by Harry Shopmaker to Donald Brod and quickly, Don was smitten by Phyllis’s big smile. Shortly after, they married, and were together for 65 years. Phyllis and Don moved to St. Louis in 1948, to start Donald’s career and Phyllis became a homemaker when they started the Brod family with two children, Dorothy (Dotty) and Daniel (Skip). She became very active with her children’s school, and made many friends. To expand his growing business Don, the couple and their son, moved back to Phyllis’s hometown of Kansas City Missouri, in the early 1970’s. She was happy to be back where she could spend time, enjoying the activities she loved (tennis, golf and bridge) with her cousins (Horty and Jean). She also spent her time working with many charitable organizations. Phyllis always put family first but a close second was her love of Kansas City sports especially her beloved KC Chiefs. Phyllis was proceeded in death by her parents, Rose and Herman Saizow, her husband Donald Maurice Brod. Her cousins, who were like her sisters, Hortense and Jean. As well as, the many individuals who made her life special. Phyllis is survived by her son and daughter-in-law: Daniel “Skip” Brod and Val Brod, Littleton, CO; daughter and son-in-law: Dorothy “Dotty” Keshner and Gary Keshner, Lee’s Summit MO; grandchildren: Jeff Anderson and Stacey Anderson The family suggests contributions to Temple Israel of Greater Kansas City, MO, 9300 Nall Ave, Prairie Village, KS 66207 or contributions to the Prairie Elder Care for Caretakers of the Morse House, who assisted greatly with the final days of Phyllis’s life, 10034 W.151st St, Overland Park, KS 6622.

The family of Phyllis Elston Brod created this Life Tributes page to make it easy to share your memories.