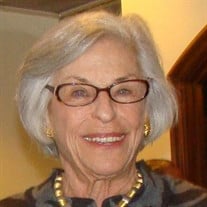 After celebrating her 89th birthday at home with friends and family a week earlier, Phyllis Jean Brown passed away on March 4, 2015, once again surrounded by family. Services will take place on Sunday, March 8, 2015, at Louis Memorial Chapel, 6830 Troost, Kansas City, Mo, at 11:00 am, with burial to follow at Rose Hill Cemetery. The family suggests contributions to the New Reform Temple, National Council of Jewish Women, or Kansas City Hospice and Palliative Care. Born and raised in South Bend, IN, Jean was the youngest of four children born to Louis and Bess Levy. She followed in the footsteps of her three older siblings, heading off to the University of Michigan where she met Bernard ”Bud” Brown, a handsome fraternity boy from Kansas City, MO. Following Bud’s graduation and discharge from the Navy, the couple married in 1946 and settled in the Kansas City area where Bud operated an automobile dealership with his father. Over the years, their family grew to include three children, five grandchildren and two great-grandchildren. Jean was an avid golfer, having made not one but two holes-in-one. She also enjoyed tennis, playing in her many card games, travelling, reading, cooking and entertaining. She began taking art classes in her later years and surprised herself and others with her talent. She volunteered with a number of organizations, including Menorah Medical Center, Jewish Family and Children Services, the American Cancer Society, United Way, and the PTA. Her main involvement over the years was with the National Council of Jewish Women, Greater Kansas City Section, where she served on various committees and held several offices, including President. For her many years of devoted service to NCJW, Jean was honored with the prestigious Hannah G. Solomon Award in 1985. She was also a member of the Oakwood Country Club and The New Reform Temple. Jean was predeceased by Bud in 2013, after 67 years of marriage. She leaves her children Phil and Janelle Brown, Carol Brown, Bette and Bob Grossman, grandchildren Marisha Brown-Smith and Bill Smith, Brian Grossman, Abbey and Rudy Rosen, Carrie Grossman, Katie Braun, and great-grandchildren Cole and Caelan Smith, sister-in-law Thelma Byers, and nieces and nephew. The family also wishes to thank the dedicated professionals and longtime housekeeper who helped with Jean’s care over the last few months.

After celebrating her 89th birthday at home with friends and family a week earlier, Phyllis Jean Brown passed away on March 4, 2015, once again surrounded by family. Services will take place on Sunday, March 8, 2015, at Louis Memorial Chapel,... View Obituary & Service Information

The family of PHYLLIS JEAN BROWN created this Life Tributes page to make it easy to share your memories.

After celebrating her 89th birthday at home with friends and...