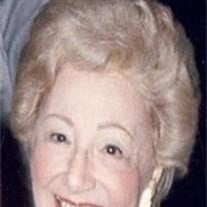 Phyllis Audrey Leidner Lissauer, 94, of Overland Park, KS, passed away Thursday, February 11, 2010. Funeral services will be at 1:30pm Sunday, February 14, at The Louis Memorial Chapel, 6830 Troost Avenue. Burial at Rose Hill Cemetery. Kindly omit flowers, the family suggests contributions to Kansas City Hospice or The Temple, Congregation B’nai Jehudah. Mrs. Lissauer was born in Cleveland, OH. While living in Cleveland, she met George Lissauer. In 1936 they were married in Dallas, TX where he and his brothers owned a women’s ready to wear manufacturing company for many years. In Dallas, she sang in the choirs at Temple Emanuel and Sherith Israel Synagogue. Music was a big part of her life. She was known as “The Wedding Singer”. Music was her passion. In the late 1980’s, she and her husband moved to the Kansas City area to be with her son and daughter. She then was a sales representative for Suzuki Music Company. Mrs. Lissauer was a member of The Temple, Congregation B’nai Jehudah, Brandeis University Women and the National Council of Jewish Women. She loved reading, was active in a book club, stayed informed on current events and loved to play bridge. Mrs. Lissauer was preceded in death by her husband of 62 years, George Lissauer, in 1999 and her sister, Eunice Becker. She is survived by her son and daughter-in-law: Joel and Carol Lissauer, Overland Park, KS; daughter and son-in-law: Joyce and James Kaplan, Mission Hills, KS; brother: Malcolm Leidner, Dallas, TX; grandchildren: Judi and Joseph Tauber; Deborah Glassberg; Jamie and Jodi Kaplan; David and Sara Lissauer; Catherine Lissauer; Jodi and Tim Shroba; great-grandchildren: Allyson, Jessica, David, Sam, Jacaqueline, Joseph, Jennavieve, Grant, Logan, Leah, Anna and Isaac.

The family of Phyllis L. Lissauer created this Life Tributes page to make it easy to share your memories.