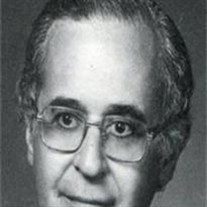 Rabbi, teacher, writer, counselor, orator par excellence, devoted student of all things Jewish, Rabbi Morris B. Margolies died on November 9, 2012. He was an inspiration to all who thirsted for Jewish knowledge. Judaism and the Jewish people were his driving passions, and his highest ambition was to instill those passions in others. Many of his students became rabbis themselves and innumerable others were inspired to live more fully Jewish lives owing to his influence. His lecture series at Beth Shalom Synagogue, where he served as senior rabbi for 25 years, regularly drew hundreds of listeners, and his sermons, occasionally marked by controversy but always uplifting, drew on his vast store of Jewish law, lore, history and culture. He rarely missed an opportunity to impart some nugget of Jewish wisdom, whether the subject of his talks was baseball, Shakespeare, Chaim Nachman Bialik or Johann Sebastian Bach. He officiated at thousands of weddings, funerals, bar- and bat mitzvahs, and continued to dispense healing wisdom and pastoral advice to those in crisis and distress well after his retirement from the pulpit in 1986. He was a champion of civil rights, an implacable foe of tyranny in all its forms, a lover of Eretz Yisrael and, above all, a propagator of Jewish values. He pushed for the establishment of what is now the Hyman Brand Hebrew Academy and agitated for equal rights for women in the synagogue. He blended modernity with traditionalism, and insisted on viewing science as a necessary and indispensable complement of faith. He came from a distinguished Jewish family and was a direct descendant of the founder of Chabad, Rabbi Schneur Zalman of Liadi (1745-1812). He descended from multiple generations of rabbis, not least of whom was his own father, Rabbi Yosef Meir Margaliyot, a spellbinding Yiddish orator and renowned Jewish educator. Rabbi Margolies was born in Jerusalem on the 25th of Kislev, the first night of Hanukkah, 1921. His mother, Malka Chasya, was a sixth-generation Israeli. He came to the United States at the age of eight, his father having emigrated amid the privations of the Great Depression and ongoing turmoil in what was then the land of Palestine. He spent his youth in the Bronx in New York and matriculated at Yeshiva University, receiving his “smicha,” or ordination, from Rabbi Joseph Soloveitchik, the foremost Talmudic sage of the modern era, in his senior year. He received his M.A. in English literature from the University of Chicago in 1946 and his Ph.D. in Jewish history, under the auspices of the eminent Jewish historian Salo Baron, from Columbia University in 1976. He received an honorary Doctor of Divinity degree from the Jewish Theological Seminary in 1968. He was rabbi of Hyde Park Hebrew Center in Chicago from 1943 to 1947, executive director of the American Jewish Congress, Midwest Division, from 1947 to 1949, rabbi of BMH Synagogue in Denver from 1949 to 1951 and a chaplain in the U.S. Army from 1951 to 1952, serving much of that time in Korea during the Korean War. From 1952 to 1961, he was rabbi of Temple Beth El in Brooklyn, N.Y. He became senior rabbi of Beth Shalom Synagogue in Kansas City in 1961, succeeding Rabbi Gershon Hadas. He retired in 1986, whereupon he took up duties as a professor of Jewish history at the University of Kansas until 1993. He was the author of Torah-Vision, a book of sermonic essays; Ten Turning Points in Jewish History; The Jew of the Century (later reprinted as Twenty Twenty: Jewish Visionaries Through Two Thousand Years); Samuel David Luzzatto, an expanded version of his doctoral dissertation; and A Gathering of Angels: Angels in Jewish Life and Literature. He is survived by his wife of 60 years, Ruth Margolies; his brother, Israel Margolies; three children, Daniel Margolies and his wife, Deborah Salkov; Jonathan Margolies and his former wife, Diane Margolies; and Malka Margolies and her husband, Walter Scott; six grandchildren, Rachel Goldberg and her husband Ari Goldberg; Max Margolies; Micah Margolies; Shoshana Margolies; Jacob Margolies; and Gavriel Scott; and three great-grandchildren, Leora, Ezra and Adina Goldberg. The family would like to thank the wonderful caregivers from Enhanced HomeCare who served Rabbi Margolies with such devotion: Brinda, Lisa, Grace and Tranique. In lieu of flowers, the family suggests donations in Rabbi Margolies’s memory be made to the Hyman Brand Hebrew Academy. Funeral services will be held at 2:00pm Monday, November 12, at Kehilath Israel Synagogue, 10501 Conser, with burial to follow at Mt. Carmel Cemetery.

Rabbi, teacher, writer, counselor, orator par excellence, devoted student of all things Jewish, Rabbi Morris B. Margolies died on November 9, 2012. He was an inspiration to all who thirsted for Jewish knowledge. Judaism and the Jewish people... View Obituary & Service Information

The family of Rabbi Morris Margolies created this Life Tributes page to make it easy to share your memories.