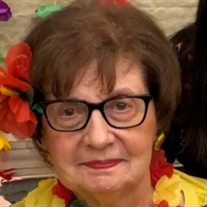 Radine E. Shaw, 94, beloved wife, mother, grandmother, and great grandmother, died Saturday, July 11th, at Village Shalom. She was born August 20th, 1925 in Kansas City, Missouri. She spent her life in the greater Kansas City area with the love of her life, Raymond Albert Shaw, whom she married on August 19th, 1945. Together they traveled the world, lovingly raised two children, and doted on their many grandchildren and great-grandchildren. Throughout her life, Radine had many business ventures and loved to be involved in her community. She ran a Rummage Shop in Kansas City, KS. She owned and managed Hobby Lane for over 10 years with her husband Ray and son Mark. She was also a secretary at Bendix Corporation for many years. In her spare time, she spent numerous hours volunteering. She wrote for the B’Nai Brith newsletter, was President of Denver Home, taught Sunday School at Ohev Sholom, and worked in the B’nai Jehudah gift shop. Radine was more creative than many realized. She loved to write and, in fact, won awards for her parodies, poetry, and songs. Her favorite pieces to write, however, were special, heartfelt “odes” to her closest family and friends. Every person who encountered Radine was immediately taken by her inner and outer beauty. Radine was preceded in death by her loving husband Raymond, her son Mark Shaw, and her sister Muriel Shaffer. She is survived by her sister, Jackie (Robert) Malka; brother, Victor (Diana) Hurst; sister-in-law, Phyllis Hurst (Shaw); and daughter and son-in-law, Rosanne and Randy Deutch. Grandchildren are Marisa Tawil (Greg Sumner), Meagan Deutch, Brad (Angie) Shaw, and Melissa (Rob) Ritter. Great grandchildren are Isabella and Madeline Tawil, Brett Sumner, Peyton Shaw, Rosalie Scott, Eliza and Isaac Ritter. She is also survived by many loving nieces, nephews, and countless family and friends. Radine’s family would like to thank the staffs at Village Shalom and Kansas City Hospice for their care and compassion. A private graveside service will be held on Monday, July 13, 2020. The service will also be streamed live via Zoom. For details, please contact Louis Memorial Chapel at (816) 361-5211. Contributions may be sent to the Susan Love Research Foundation, Parkinson’s Research Foundation, Village Shalom’s Financial Assistance Program, or Kansas City Hospice’s Sustaining Angels.

The family of Radine Eleanore Shaw created this Life Tributes page to make it easy to share your memories.