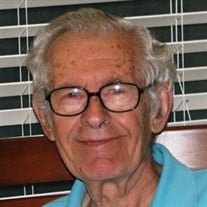 Ralph G. Matzdorff, 87, of Overland Park, KS, passed away peacefully at home on Wednesday, September 3, 2014. Funeral services will be 11:00am Thursday, September 4, at The Louis Memorial Chapel, 6830 Troost Avenue, Kansas City, MO with burial to follow at Mt. Carmel Cemetery. In lieu of flowers, the family requests contributions to Kansas City Hospice and Palliative Care or any charity of one’s choice. Ralph was born June 23, 1927, in Berlin, Germany, the son of Paul and Ellen (Cohen) Matzdorff. He and his parents fled Nazi Germany in 1939 and went to Shanghai, China. His Bar Mitzvah took place in Shanghai, China where he was also an active member of the British Boy Scouts. The family lived in Hongkew provence in China for 10 years, waiting for their papers to the United States. While in China, Ralph received his plumbing and electrical training through ORT, a society for vocational trades, and was able to work outside of the refugee compound for the occupied Japanese. After the end of WWII, he became proficient in English when he worked with the United States Army, taking care of motor vehicles. Ralph came to the United States in 1948, and found his way to Kansas City. He began his career as an electrician at the Muehlebach Hotel. He continued his education and became a 55 year member of the International Brotherhood of Electrical Workers, Local #124. He retired from Evans Electric in 1989. Ralph was a member of Kehilath Israel Synagogue and a former member of Beth Shalom Synagogue. He was married to Sophia Barash Matzdorff for 32 years before her passing. Ralph leaves his loving wife, Adelle Coren Matzdorff, of the home; daughter and son-in-law: Gloria and Matthew Elyachar, Overland Park, KS; son: James Matzdorff, Newport Beach, CA; step-daughter: Carolin Knox-Linck, Kansas City, MO; grandsons: Jacob Elyachar, Overland Park; Aaron Elyachar, Oklahoma City, OK; Ronald and Natalie Knox and great-grandson Isaac, of Washington, D.C. The family would like to thank caregivers Kerry Kort, Shannon Ross, and Stacy Crawford for their loving kindness. Ralph loved life. He volunteered for many organizations and was a model train enthusiast. He had a great sense of humor and always had a sparkle in his blue eyes.

The family of Ralph G. Matzdorff created this Life Tributes page to make it easy to share your memories.