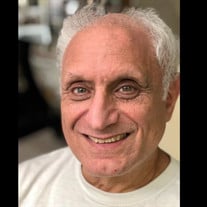 Ralph A. Levy, 77, of Liberty, MO passed away March 10, 2022. Rafi/Ralph/Bowser was a kind man, with a most generous heart. Yes, he was quirky and brilliant. He was also talented. He wrote dozens of novels, most of which were fascinating books, the kind that were hard to put down. He also wrote music, songs of his life experiences in the style of sixties folk music. He crafted guitars and banjos out of found objects, like cookie tins. He was exceedingly modest about his achievements, most often being self-deprecating. He loved his pets. His cat, Buddy, died about a year ago. Ralph was quite upset about that. However, the worst death to befall him was when his dog Ussie died a couple of months ago. She had been his companion for over fifteen years. He was inconsolable about her passing, and was undoubtedly still grieving when he himself passed. Ralph believed in giving money to panhandlers on the street, rather than to agencies with strategic planning. He was the son of the late Carl and Elsie Levy. Ralph is survived by the love of his life, Bonnie Schuman, with whom he reconnected after having met her fifty years earlier on a kibbutz. He also leaves behind his grieving sister, “Rosie” Irene Randall (the late Ron) and twin brother Ronnie Levy and his wife, Pam. He was beloved by his many nieces and nephews, by Bonnie’s children and grandchildren, by cousins, and by his many friends in Missouri and Los Angeles who will miss his warmth and humor. Services will be held on Thursday March 17, 2022 at 11:30am Central Time at the Kehilath Israel Blue Ridge Cemetery Chapel, with Rabbi Sarah Smiley officiating, 1901 Blue Ridge Blvd., Independence, MO 64052. To join by zoom, please email [email protected] for the zoom link and passcode.

Ralph A. Levy, 77, of Liberty, MO passed away March 10, 2022. Rafi/Ralph/Bowser was a kind man, with a most generous heart. Yes, he was quirky and brilliant. He was also talented. He wrote dozens of novels, most of which were fascinating... View Obituary & Service Information

The family of Ralph "Rafi" Arthur Levy created this Life Tributes page to make it easy to share your memories.