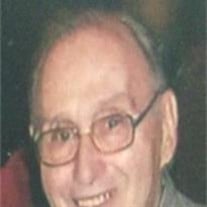 Raymond Shaw, 89, of Overland Park, KS, passed away Wednesday, January 30, 2013 at Village Shalom. Funeral services will be at 10:30am Friday, February 1, at The Louis Memorial Chapel, 6830 Troost Avenue, with burial to follow at Rose Hill Cemetery. In lieu of flowers, the family suggests contributions to Congregation Beth Torah, Village Shalom or Kansas City Hospice. Raymond was born in Kansas City, KS, the son of Colleph and Rose Anna (Louis) Shaw, was a lifelong area resident and attended Kansas City, KS schools, graduating from Wyandotte High School. He started working for his country by being a draftsman for Pratt & Whitney, which would later become Westinghouse and Bendix, working for them for nearly 35 years before his retirement. Raymond was a member of Congregation Beth Torah and Congregation Ohev Sholom, was a former member of The Temple, Congregation B’nai Jehudah and belonged to the B’nai B’rith Bowling League. He loved to golf and especially enjoyed traveling. Raymond was an avid event planner for family gatherings which always had to include a big meal. His focus was his extended family, especially his loving wife of 67 years, Radine. Raymond was preceded in death by his parents and his step-mother, Leah Shaw. He is survived by his wife, Radine Shaw, of the home; son: Mark Shaw, Overland Park, KS; daughter and son-in-law: Rosanne and Randy Deutch, Overland Park, KS; sister and brother-in-law: Phyllis and Harold Hurst, Prairie Village, KS; grandchildren and their spouses: Bradley and Angie Shaw, Melissa and Rob Ritter, Marisa and David Tawil and Meagan Deutch; great-grandchildren: Isabella Tawil, Peyton Shaw, Eliza Ritter and Madeline Tawil. Raymond will be greatly missed by his family and many friends.

Raymond Shaw, 89, of Overland Park, KS, passed away Wednesday, January 30, 2013 at Village Shalom. Funeral services will be at 10:30am Friday, February 1, at The Louis Memorial Chapel, 6830 Troost Avenue, with burial to follow at Rose Hill Cemetery.... View Obituary & Service Information

The family of Raymond Shaw created this Life Tributes page to make it easy to share your memories.