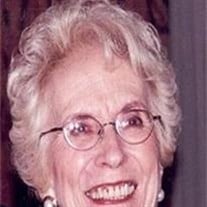 Reeva Biederman Brown, 87, of Overland Park, Kansas, passed away on Tuesday evening, December 15th at Village Shalom. Funeral services will be held 11:00 Sunday, December 20,at Louis Memorial Chapel followed by burial at Rose Hill Cemetery. Reeva was born in Kansas City, Missouri to Irene Waldner Goldberg and Jacob Goldberg on December 25th, 1921. She was preceded in death by Harry Biederman, her husband of 37 years, in 1977 and Paul Brown, her husband of 29 years, in 2008. Her brothers, Herb and Stan Goldberg, also preceded her in death. Reeva was a loving and caring wife, mother, grandmother, great-grandmother, and friend. She gave of her time and energy to all of those she held dear. She graduated Westport High in 1937. At the age of sixteen she moved to New York after the death of her mother to stay with her father and attend Hunter's Secretarial College for two years. She married Harry in 1940 and returned to Kansas City. They moved to a naval base outside of San Francisco during World War II and to Los Angeles after the war. In 1952 they returned to Kansas City where Reeva worked with Harry at B&G Wrecking Co. and raised her family. Two years after Harry's death she married Paul. They shared a life of family and friends and loved to travel. She was blessed with two wonderful husbands, appreciating every year with both. She was a member of The Temple, Congregation B'nai Jehudah, City of Hope, Brandeis, National Council of Jewish Women, and Menorah Auxiliary, giving many hours of her time as a volunteer. Reeva is survived by her two daughters, Irene (Saul) Ellis, Phyllis (Shel) Roufa; grandchildren - Jim Ellis, Michael (Jessica) Ellis, Greg (Kara) Roufa, Brian Roufa, and Mindi Ellis; great-grandchildren - Hersh and Shayna Ellis and Joselyn Ellis. She was preceded in death by her step-son Bart Brown and is survived by Susan Tucker, Leslee (Bob) Blackler, Lisa (Eric) Oppenheimer, and grandchildren Zack and Jed Tucker, Liz and Jennifer Blackler, and Emily and Ben Oppenheimer. Reeva was a beautiful person inside and out. She had many wonderful friends who were a very important part of her life for over sixty years. She will be deeply missed by all those who loved her. We want to thank Dr. Alexander Davis and the staff at Village Shalom who were so loving and caring through the last years of her life, and the nurses from Kansas City Hospice who were so kind and caring. In lieu of flowers, the family suggests contributions to Village Shalom, Hospice of Kansas City, or a charity of your choice.

The family of Reeva Biederman Brown created this Life Tributes page to make it easy to share your memories.