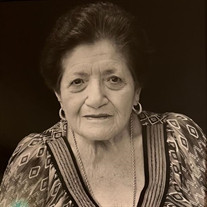 Loving Wife, Mama Regina, Bubbie, Aunt and a good friend to many so many people. Regina touched the lives of many people throughout her 92 years which sadly ended on April 8, 2022. Regina was a Holocaust Survivor. She was born in Lipiny, Poland on May 17, 1929, to Beryl & Faygla Chaba who owned a department store in her hometown. Regina was the oldest of three children. Regina had many fond memories as she shared with us prior to World War II. She enjoyed cooking, and baking with her grandmother. She loved to go to the forest to pick berries with her brother and sister. In 1939, Regina’s childhood changed forever. The Nazi’s invaded Poland, curfews were instituted for all Jews. Yellow armbands to designate Jews had to be worn along with a Star of David. Many times, they picked Regina to clean the soldiers’ quarters in The Ghetto. Regina was deported on a freight train to Parschnitz, a forced labor camp in Czechoslovakia. The rest of her family was sent to Auschwitz and murdered in the gas chamber. Regina endured cold temperatures in the concentration camp. She made friends with a German Soldier who provided her with a warm brick to keep her and others warm throughout the night. Regina and others were liberated by The Russian Army in May 1945 while in Czechoslovakia. Regina did not know if other family members had survived. She went back to Poland to try and search. After the war, Regina went to Israel with the assistance of the Red Cross, who helped her finish school and eventually joined the Israeli Army to become a military nurse. Regina fought for Israel’s Independence. While in Haifa, Regina lived on a Kibbutz. She never stopped looking for family. With the help of the Red Cross, Regina found out that she had a surviving aunt in the United States as well as other family members in London. Regina would come to the United States on a VISA through Ellis Island. The year was 1958 and Regina would stay with Sol and Jenny Blum. Jenny set Regina up on a blind date with a man named Eric J. Dollman. This man eventually became Regina’s husband. After they were married, travelling was one of their favorite things to do together since Regina was unsure of having kids at the time. They finally settled down and had two beautiful daughters. Felice (Dollman) Vargas and Lori Dollman. Regina was a long-time member of Congregation Beth Shalom Synagogue in Kansas City, we attended Shul every Saturday until Regina was unable to attend. Regina cared for her husband, Eric. Eric passed away in March 2002. Regina was involved with the Sisterhood, American Legion as well as with Holocaust programming and education. In 2014, Regina represented Kansas City by lighting the Holocaust Memorial candle in honor of the six million Jews who perished. She made sure that traditions she was brought up with remained within her family and would be passed to future generations. Over the next few years, Regina would take part in several radio, television interviews about her life as a Holocaust survivor. Many articles were written, and portraits were taken. One stands out amongst all. Luigi Toscano, who travels internationally to interview and photograph survivors of the Holocaust. He honors those Holocaust survivors who endured the brutal treatment of the Nazis. He captured life size portraits and vivid stories of the Lest We Forget travelling exhibit worldwide. Luigi wanted to make sure that no one ever forgets the Holocaust existed. Regina met with Luigi and her story has travelled the world. When the exhibit was in Kansas City, Regina’s portrait was featured at the World War I Museum. This was a huge honor. Over the next several years, Regina had some health issues, but survived it all. Her strength and will was amazing. Regina leaves behind a beautiful loving family. She is survived by her two children, Felice Dollman (Vargas) and her husband Geraldo, Lori Dollman and two grandchildren, Eric, and Mariana. Sister N law, Johanna Stein, Nieces, Nephew, and many cousins. The Family thanks Kansas City Hospice for all their care and visits to the home for Regina. A big thank you to Jewish Family Services for all their assistance in everyday needs and support of Regina. Thanks also to the Midwest Holocaust Center for Education in which Regina was so proud of their teachings and lessons taught to so many people. We will Never Forget the Holocaust. Mama Regina’s life and memory will live on with her children and all the people she has touched. Home is Home, Peace, and Love. The family requests contributions made directly to the Family and mailed to 420 W. 109th Terrace, Kansas City, MO 64114. Regina’s funeral is being held at Kehilath Israel Blue Ridge Cemetery Chapel 1901 S. Blue Ridge Blvd Independence, MO. Online Condolences for the family may be left at LouisMemorialChapel.com.

Loving Wife, Mama Regina, Bubbie, Aunt and a good friend to many so many people. Regina touched the lives of many people throughout her 92 years which sadly ended on April 8, 2022. Regina was a Holocaust Survivor. She was born in Lipiny, Poland... View Obituary & Service Information

The family of Regina Dollman created this Life Tributes page to make it easy to share your memories.

Loving Wife, Mama Regina, Bubbie, Aunt and a good friend to many...