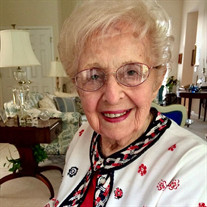 Regina Entin Pachter, 104, died June 21, 2020 at Village Shalom where she lived for the past 21 years. She was born in 1915 in Ekateranaslov, Russia (Ukraine). She was the first daughter of Dr. Sarah and Emanuel Entin. She and her mother were permitted to immigrate to Kansas City, Mo. 6 years after her father arrived to escape the Bolshevik pogroms. They arrived in Kansas City in September, 1921 at the Union Station where she met her father. Despite being held back to start kindergarten at age 6 and a half because she only spoke Russian, she later skipped two years between elementary and high school and graduated high school in 1932. She had two sisters, the late Celia Levin who died in Kansas City in 1996 and Jere Clayman who resides in Atlanta, Ga. Regina met Meyer Pachter at a high school sorority party in 1930 in Kansas City while she was playing the piano. It was “love at first sight.” He was two years older and had to stay in Kansas City to work and save money to follow her to the University of Missouri in Columbia, Mo. She went there directly after high school. They were engaged in April, 1936 and they graduated in June, 1936 and married in December, 1936. Meyer Pachter died in 2001 after 65 years of marriage. Regina received her Bachelor of Arts degree in social work. A common thread throughout her life was her music. She was an accomplished pianist who started lessons at age 6. She played for many organizations, charities and social events in Kansas City into her 100s. One of her most meaningful engagements was playing for the reopening of the World War I memorial held at Union Station where she had arrived in 1921. Among her other passions were social work, philanthropy, and forging friendships through all of her affiliations. She was a devoted daughter to Sarah Entin Kahn, loving mother to Brenda Pachter Siegler (Richard), Elliot Pachter and Maurine Pachter, adoring grandmother to Dr. Lauren Siegler Muhlheim (Eric), Kelsi and Robert Pachter. She was blessed to have great-grandchildren, Henry Muhlheim (graduate of the University of Chicago), Rebecca Muhlheim (rising senior at Carleton College), Allison Muhlheim (rising sophomore at Occidental College), and Zachary Pachter. She had many nieces and nephews. Marcie and Bruce Kaplan held a special place in her heart. Regina filled her life with many activities: case worker for Jackson County welfare department, proud member of the following: American Association of Social Workers; American Association of University Women; B’nai Brith; Oakwood Country Club; Jewish Federation of Greater Kansas City; Kehilath Israel Synagogue and life member of Beth Shalom Synagogue and its sisterhood. She and Meyer received the prestigious Kovod award from Beth Shalom on their 55th anniversary. She even modeled ladies’ coats and suits for the Pachter Garment Company and worked at Swansons on the Plaza from 1970 until 1985. She was a member of Hadassah and was the president of the central region. Another favorite organization was the Brandeis University Women’s group. She was secretary, treasurer, president for two terms, and chairman of many fundraising events. During her presidency the Kansa City chapter won the Louis Award for excellence. Regina’s passion for learning, ability to tell jokes, affectionate personality, compassion, calm disposition, loving friendships, and optimistic attitude all contributed to her living a long life despite experiencing many epidemics, world wars, and troublesome times. We will remember her fashionable style and infectious smile which always “lit up a room.” Contributions in Regina’s memory should be made to the charity of your choice. A private burial was held.

Regina Entin Pachter, 104, died June 21, 2020 at Village Shalom where she lived for the past 21 years. She was born in 1915 in Ekateranaslov, Russia (Ukraine). She was the first daughter of Dr. Sarah and Emanuel Entin. She and her mother were... View Obituary & Service Information

The family of Regina Entin Pachter created this Life Tributes page to make it easy to share your memories.