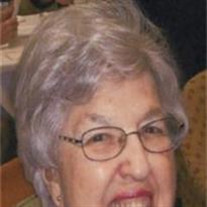 Rhetta Turkin Goldstein, 92, passed away peacefully at her home on March 6, 2013. Funeral services will be at 11:30am Friday, March 8, at The Louis Memorial Chapel, 6830 Troost Avenue, Kansas City, MO with burial to follow at Sheffield Cemetery. Rhetta was born in Chicago on Oct 13, 1920 to Morris Turkin and Beatrice Gordon Turkin. She married Nathan Goldstein on Dec 8, 1940. Although their mutually “short” heights drew them together initially, the love and adoration they shared in 55 years of marriage was beyond measurement. Except for a short period during WWII when she worked at Goldstein Brothers Bag & Basket Company, Rhetta was devoted to being the wonderful wife, mother, grandmother, sister, aunt, friend and volunteer that she always was. She was extremely proud of her lifetime involvement with the Women’s Auxiliary of the Jewish War Veterans, attaining the post of State Chair and volunteering countless hours to improve the lives of veterans. Rhetta was also active in Hadassah and Kehilath Israel Synagogue for many years, and co-initiated a multi-year roundtable discussion to connect women of diverse backgrounds to learn from one another. She was predeceased by her parents, her stepmother Sarah Belzer Turkin, her husband, her son, Gene Goldstein and daughter, Sandy Eisenman, her daughter-in-law, Sandi Weisberger Goldstein, step-brother, Dr. David Belzer of CA, and sister-in-law, Pat Turkin of FL. She is survived by her children, Elliott & Linda Goldstein, Cheryl & Micheal Kasson, Martin Eisenman; brother, Marshall Turkin; step-brother and wife, Ron and Judy Belzer; sister-in-law, Zona Belzer; grandchildren Keri & Daniel Unowsky, Amy Goldstein & Barry Dicker, Marjory Eisenman, Lynn & Lauren Mandell, Sara & Jason Gordon, Emily Perlstein, Erica Kasson & Derek Priday, nine great-grandchildren and many loving nieces and nephews. Her love and loyalty towards her family was unrivaled; Rhetta connected hundreds of relatives through sharing updates and planning large family reunions across the country. Rhetta was a role model to anyone lucky enough to know her about how to be a kind, loving, non-judgmental and peaceful person. She will be sorely missed by her family and friends. Donations can be made to Kehilath Israel Synagogue, Jewish War Veterans MO-KAN Post 605, Attn: Marvin Denton, 7300 W. 107th St., Apt. #402, Overland Park, KS 66212 or a charity of meaning to you.

Rhetta Turkin Goldstein, 92, passed away peacefully at her home on March 6, 2013. Funeral services will be at 11:30am Friday, March 8, at The Louis Memorial Chapel, 6830 Troost Avenue, Kansas City, MO with burial to follow at Sheffield Cemetery.... View Obituary & Service Information

The family of Rhetta Turkin Goldstein created this Life Tributes page to make it easy to share your memories.

Rhetta Turkin Goldstein, 92, passed away peacefully at her home...